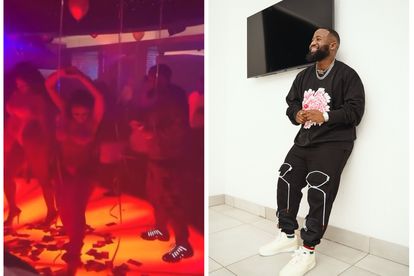 Tebogo Thobejane has officially launched her Rivonia strip club – Club X – and one of the first stars to visit it is rapper Cassper Nyovest.

The Don Billiato boss was seen throwing cash on a group of scantily clad women in a video that went viral on social media.

Club X launched on Thursday 30 June and is the brainchild of the Muvhango actress and City Girls YouTuber.

In a clip posted on Club X’s official Instagram Stories, Cassper Nyovest is seen making it rain on a group of strippers. Seen in a private room, Cassper and his entourage throw cash on the women dressed in G-strings and platform heels.

In a recent tweet, the 31-year-old rapper – who is reportedly dating Thobeka “Bex” Madjozi – boasted about being on a fast track to wealth.

According to Club X, their opening night was a massive success with all their tables being fully booked. The elite club also shared clips of the floor littered with R200 bills and packed-dancefloor.

But whilst Tebogo has claimed that Club X will help “empower” unemployed women in South Africa, social media users are not convinced

@GXIImalux12: “I hate strip clubs with everything I have, it promotes a society of ratchetness and no moral girls!”

@Nelzie101: “I really don’t think that women should be doing these kinds of things, what role models will the younger generation have?”

@Aus_Keke: “This is disgusting, they have no respect for their bodies”

Tweeps also shared their views on the quality of dancing at Club X.

@palesa_mballis: “Too many old strippers that are thick and can’t even dance on that pole. Where are the young, fresh slim ones?”

@nathi_rsa: “They need more training when it comes to showcasing their talent”

@sndeensolutions: “Strippers not as flexible, they seem to be heavy-bodied”