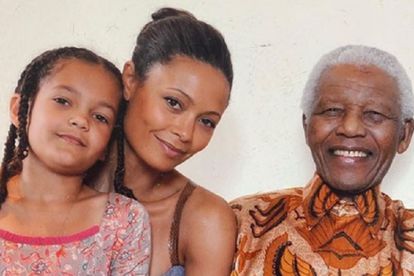 The British award-winning actress recalled her encounter with the world famous icon whom she met in Cape Town many years ago.

And now she’s revealing the wise words he shared with her and her daughter Ripley..

A MAGICAL MEETING WITH MADIBA

It wasn’t her a glamorous event or her celebrity status that afforded Thandiwe Newton the privilege of meeting Nelson Mandela.

The star happened to be at the right place at the right time when the former statesman took part in a casual photo opportunity for the public.

She wrote alongside an image of herself and daughter Ripley with Madiba: “We were in line to have a ‘photo opportunity’ with the great man. He was so gracious and patient. One after the other posed with him for a photograph.

“But when he saw Ripley he made everyone wait. He reached out his hand and beckoned her close. He asked her ‘how old are you?’ And ‘where do you go to school?’ ‘What is your name?’

“And he told her to work hard. And she did.He passed something on to her. He looked into her eyes. She was too young to really understand the magnitude of that moment. But she knows now. And I’ve witnessed it.

Thandiwe went on to share a famous quote by Madiba and how she is inspired by him to “pass on” a message of hope.

She added: “What more is there? Passing on what we know. He passed it on. And we are all changed”.

Thandiwe Newton – who recently reclaimed her birth name – also speaks fondly of her close ties to Zimbabwe, where her mother Nyasha is originally from.

The mom of three has the words “Mosi oa Tunya” tattooed on the back of her neck which is not only a Zimbabwean phrase that means “the smoke that thunders”, but the famous waterfall in the country, now named Victoria Falls.

She shared in another post: “I was conceived when my parents took a trip to Victoria Falls back in 1972. I had this tattoo inked a few years ago – I wanted to imprint the truth; that my spine and my brain – my power – is informed by my beginnings. My connection to my history.

“It informs everything I do. It generates my intention. I’m not here to create pain, I’m here to liberate. Myself, and others. You might not see me – but you’ll feel the thunder”.