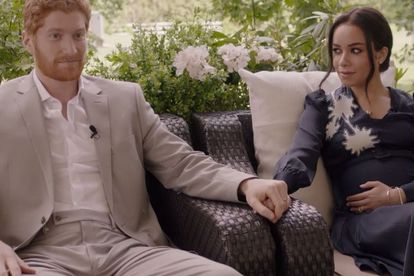 The first trailer for Lifetime’s Harry & Meghan: Escaping the Palace made waves after it was released on 9 July.

Lifetime previously released films about the royal couple in 2018 (Harry & Meghan: A Royal Romance) and 2019 (Harry & Meghan: Becoming Royal). Now the latest teaser, which dropped on Instagram, seemingly teases that “not all fairytales have the perfect ending.”

Escaping the Palace is the third Lifetime film retelling the story of the former royals, this time focusing on their highly publicized exit from the British royal family, dubbed “Megxit” back in 2020. Like most of its movies, Lifetime’s iteration of the story is full of drama.

According to the New York Post, the trailer begins with Jordan Dean as Prince Harry vowing to protect Sydney Morton as Meghan Markle. “I see you literally being hounded to death and I’m helpless to stop it,” he says in the teaser.

“I am the person who is strong and gets things right,” the fictional Meghan responds as she looks over the film’s baby Archie. The couple then tells each other, “I can’t lose you.”

Watch the official trailer down here

What happened inside the palace

Lifetime said that the third film will recount “what really happened inside the palace that drove Harry and Meghan to leave everything behind in order to make a future for themselves and their son Archie.”

Lifetime also promises that it will “detail Meghan’s growing isolation and sadness, their disappointment that ‘The Firm’ was not defending them against the press’s attacks and Harry’s fear that history would repeat itself and he would not be able to protect his wife and son from the same forces that caused his mother’s untimely death.”

The movie is also set to delve into the private feud between Harry and his brother Prince William and their father Prince Charles, as well the conflict between Meghan and Kate Middleton. The couple spoke about these issues in real-life in an interview with Oprah Winfrey earlier this year.

It is not clear when the movie will be released,.