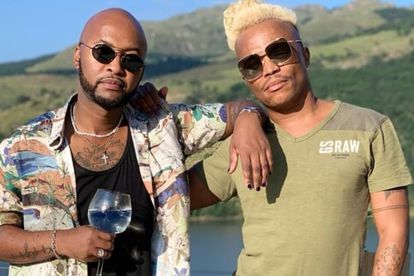 Best friend duo Somizi Mhlongo and Vusi Nova celebrated their 16th anniversary together on 28 March taking to social media to share their sentiments about their relationship.

Somizi recently wrapped up his chef tour taking musician Vusi Nova along for the ride. The Dinner At Somizi’s star and Idols SA judge ventured on a month-long cooking tour at Cofi Brooklyn, a restaurant in Pretoria where he served up his top-notch meals from his cookbook, titled I Am Not A Chef.

Vusi Nova proved himself to be a very supportive “bestie” as he helped Somizi push the sales for his cookbook. Somizi took to Instagram to share a video of him and Vusi which received more than 9 000 likes.

“Me and bestie pushing sales,” he captioned the video.

Following the chef tour, Somizi and Vusi Nova spent some quality time together in celebration of their 16-year friendship anniversary. The pair posted similar photos to their Instagram using the Instagrams album feature.

Somizi captioned the pictures: “16 years and going strong looks like this” and the post received over 51 000 likes.

Vusi Nova, on the other hand, kept it short and sweet with just the word “inseparable” serving as the caption.

In early February, SomNova took a private jet to Cape Town where they stayed at a luxury hotel and indulged in a private yacht. About two weeks later, they embraced the beauty of nature with a safari at Kruger National Park.

These “bestications” sparked romance rumours between the pair as Somizi’s husband, Mohale Motaung, has always been left out of it all. SomNova seems unbothered by the public attention they gather in bucket loads as they continue to vacation in style.

Somizi’s marriage has been under public scrutiny for months now as people believe there’s trouble in paradise.

However, Vusi Nova denied the rumours of sharing a romantic relationship with Somizi. Mohale had some explaining of his own to do after Aaron Molosi posted a picture with a mystery man that Twitter believed resembled Mohale very closely.

There has also been reports that a Somhale divorce is on the cards.

The besties, known for their “soft-life travel adventures” even in the middle of a global pandemic, revealed that they promised each other a “bestication” every two weeks for the rest of this year and so far they have been hitting their target.

“We promised each other that in 2021 we are doing vacations every 2 weeks…so far so good,” wrote Somizi on Instagram.

For their most recent outing, SomNova have taken a road trip to Swaziland for their third official bestication of the year.

Here are some soft-life visuals from their Swaziland trip: