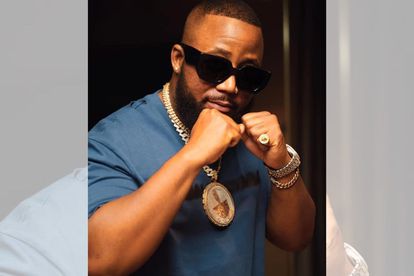 Cassper Nyovest promised to go on Podcast and Chill.
Image via Instagram
@casspernyovest

Cassper Nyovest promised to go on Podcast and Chill.
Image via Instagram
@casspernyovest

It appears Cassper Nyovest has forgotten about the promise he made to a fan about going on MacG’s Podcast and Chill should he lose his boxing match with Naak Musiq. One person who hasn’t forgotten is MacG’s co-host Sol Phenduka. The famous podcaster decided to give the rapper a reminder and South African Twitter users haven’t stopped laughing their butts off.

Many people were taken by surprise after the Baby Girl rapper’s defeat, especially since he gave YouTuber Slik Talk a proper beating in December last year.

What made the big fight even more exciting was the fact that Cassper – who once said he would never go on MacG’s controversial podcast – agreed he would if he lost to Naak.

“If I lose the fight with NAAK I will go on MacG’s podcast. If I beat Naak doe, I’ll never go on that show,” wrote the rapper in February this year.

Now many people, including the podcast’s Sol Phenduka, have reminded the rapper of the promise he made before his surprising defeat.

Here’s what Mzansi thinks of the cheeky reminder

“Cassper is smart, he can handle the interview but I do not think he will go more especially after the gents spoke so bad about his baby mama and the baby.”