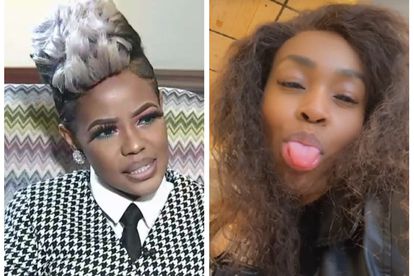 Mandisa Mkhize – the woman married to Senzo Meyiwa at the time of his death – has seemingly given Zandie Khumalo the middle finger following her bombshell interview.

On Monday night, the sister of Kelly Khumalo brazenly called on police to pursue Senzo’s widow as a murder suspect. She also pointed a finger at Senzo’s mom, Nombifuthi Meyiwa.

Senzo was shot and killed on 26 October 2014 whilst at the Vosloorus home of Kelly Khumalo’s mom. Also present were Zandie Khumalo and her boyfriend at the time Longwe Twala as well as Senzo’s friends Mthokozisi Thwala and Tumelo Madlala.

Currently, five men – accused of carrying out a hot on Senzo Meyiwa – are on trial for his murder.

Speaking in an eNCA exclusive interview, Zandie Khumalo called on authorities to investigate the widow of Senzo Meyiwa.

This after renewed speculation that the occupants of the house are behind the death of the Orlando Pirates goalkeeper.

She said: “Looking at this whole situation if someone is dead and is a husband if someone the first suspect would be the girlfriend or the wife.

“But no one has ever looked at Mandisa. Why is she not being investigated? Is it even possible that Senzo’s mother and Mandisa conspired? Why can’t police look at other people, look at other possibilities?”

She added: “No one has ever looked at Mandisa, our phones were taken, and Mandisa’s phone has never been taken, why is she not being investigated?”.

Zandie Khumalo also pointed a finger at Senzo’s mom. She continued: “Senzo’s mom was on TV saying she tried by all means to end Kelly and Senzo’s relationship, she even went as far as getting muthi….maybe she and her daughter-in-law sent a hitman, not necessarily to target Senzo but to target Kelly to make sure their relationship doesn’t happen.”

Taking to her Instagram Story, Mandisa Mkhize shared a short clip of her pulling her tongue at the camera.

The mom-of-one smiled cheekily at the camera.

Meanwhile, Zandie Khumalo has continued to push the agenda that Mandisa was involved in the murder of Senzo Meyiwa. The singer has shared tweets supporting her theory on her Instagram account.