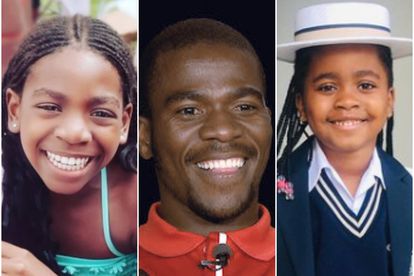 The death of Senzo Meyiwa in 2014 left behind a country of heartbroken soccer stars, and even more tragic, four children who would go grow up not knowing their father

The Bafana Bafana goalkeeper was shot and killed under mysterious circumstances on 26 October in Vosloorus, whilst visiting his girlfriend Kelly Khumalo

At the time of his death, Senzo had fathered his first child; a daughter with his wife Mandisa Mkhize, and a second with his mistress Kelly. According to News24, the Orlando Pirates star had also fathered a three-month-old son, who was presented to his family following his funeral.

Senzo Meyiwa’s first known child is Nana, a daughter whom he shared with his wife Mandisa Mkhize.

The now 15-year-old bares a striking similarity to her famous dad and is often spotted on her mom’s Instagram account. The vibrant teen loves fashion, hanging out with her friends, and spending quality time with her mom.

And eight years since her famous father’s death, fans think she looks more and more like Senzo. “Like father like daughter” are some of the regular comments seen under posts of the young girl.

A DAUGHTER WITH KELLY KHUMALO

Senzo Meyiwa’s second known daughter is Thingo, whom he conceived with girlfriend Kelly Khumalo. At the time of his death in 2014, Thingo was only seven months old

Having no recollection of her father, Thingo has also inherited her soccer star’s looks. “Senzo Meyiwa photocopy and “Senzo’s replica” are some of the comments by fans about the bubbly young girl.

Thingo recently celebrated her eighth birthday, and like her half-sister, Nana loves mommy and daughter time. Although Nana and Thingo look like a carbon copy of their dad Senzo, it’s unclear if the siblings have ever met each other.

Not much is known about Senzo Meyiwa’s other baby mamas.