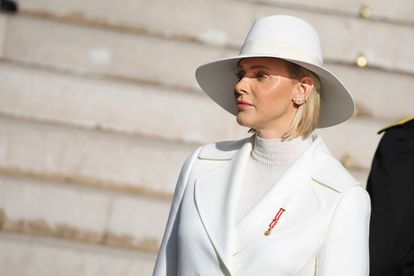 Princess Charlene has opened about the reason she cannot fly back to her husband and children in Monaco.

In an exclusive interview with News24, the former Olympic swimmer once again emphasized that she longs for “my husband, my babies and my doggies” as she explained how the surgery she had earlier this year will no longer allow her inner pressure to “equalise,” which means she can’t fly above 20 000 feet.

The palace confirmed earlier this year that Princess Charlene is still in South Africa after undergoing “multiple, complicated” procedures after contracting an ear, nose and throat (ENT) infection in June. The princess opened up about the experience herself, saying that she underwent a sinus lift and bone graft in preparation for dental implants in May. This surgery was performed prior to her mid-May arrival in South Africa, where she has been actively campaigning for wildlife protection and is continuing to convalesce.

According to People, she then sensed a problem in June when she began suffering extreme soreness in her ears. A second corrective surgery conducted on 23 June, forced the postponement of her scheduled return to Monaco to celebrate her 10th wedding anniversary in July.

Even though Princess Charlene remains physically separated from her husband and her children, Princess Gabriella and Prince Jacques, they did visit her earlier this year and has been in constant contact.

She went on to share a new update on Instagram on 9 July saying that she is (virtually) spending time with Jacqui and Bella[;] “making blankets for the crèche next door. Wish me luck”.

In the photos, the royal can be seen chatting on FaceTime with her six-year-olds and blows each of them a kiss.

The photos also show the princess sporting a shorter hairstyle, standing proudly next to a sewing machine she is using for a service project and standing in a selfie pose in front of conservation posters.

Keeping her spirits up

“My daily conversations with Albert and my children help me keep my spirits up a lot, but I miss their presence very much,” she acknowledged in a statement given to People in June. “I can’t wait for us to be together.”