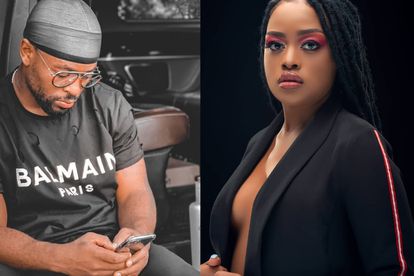 DJ Hazel Mahazard has issued a statement with an apology to Prince Kaybee for leaking his nudes on Twitter. Images via Instagram @princekaybee_sa @hazel_mahazard

DJ Hazel Mahazard has issued a statement with an apology to Prince Kaybee for leaking his nudes on Twitter. Images via Instagram @princekaybee_sa @hazel_mahazard

Pretoria-based DJ Hazel Mahazard released an official apology to the Prince Kaybee on Thursday 6 May after leaking a nude photo — which she claimed he sent her — as well as their private conversations between them, on social media earlier this week.

Mahazard revealed that she received a letter of demand from Prince Kaybee which prompted her apology.

“Official apology to Kabelo Motsamai (Princekaybee) for publication/distribution of offending statements and sexual photograph. I read your letter of demand and wish to respond as follows,” wrote Hazel Mahazard on Twitter.

All of this took place while Prince Kaybee’s side chick named “Eurica” went public with their private messages on WhatsApp and Instagram. After his failed attempt at trying to cover it up, Prince Kaybee later confessed to cheating on his girlfriend and radio presenter Zola Mhlongo, popularly known as Zola Zeelovin, for five years.

Mahazard began her apology by acknowledging that she was wrong for sharing pictures and private conversations between herself and Prince Kaybee. She also stated that she has since deleted the post.

“On Tuesday, 4 May I posted a tweet with pictures and private conversations between Kabelo Motsamai (Prince Kaybee) and myself. Would like to take this opportunity to apologise to Kabelo for the posts, and any damage that the last picture may have caused to his dignity, public image, personal life and his businesses,” said Mahazard in her statement.

“Upon deep reflection, I now realise how unjust and uncalled for my actions were, and I would like to use this opportunity to apologise unreservedly. I have since deleted the post and I condemn with serious caution against the continuous circulation of those pictures by others,” she added.

“I met Kabelo Motsami in September 2020 through an official work project that we were both involved in. I have never engaged in any casual or sexual relationship with Kabelo Motsami from the time I met him to date.

“I regret the entire incident and have taken to heart all the harsh lessons that came with it. I do not intend to make any further public statements on this matter and further appeal that Kabelo be afforded the privacy to deal with any matters that arise from this unfortunate incident,” she added.