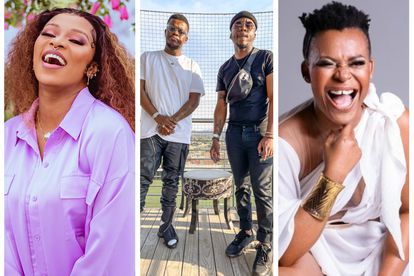 Nota Baloyi has blamed the reported split of Black Motion on DJ Zinhle and Zodwa Wabantu.
Image via Instagram
@djzinhle/@realblackmotion/@zodwalibram

Nota Baloyi has blamed the reported split of Black Motion on DJ Zinhle and Zodwa Wabantu.
Image via Instagram
@djzinhle/@realblackmotion/@zodwalibram

Nota Baloyi has continued to shoot from the hip with his controversial tweets – the latest being that Zodwa Wabantu and DJ Zinhle are to blame for the reported demise of music group Black Motion.

The rapper and music commentator took to Twitter to bash the female stars. This, after producer and DJ Prince Kaybee fuelled renewed speculation that the group had parted ways.

On Wednesday morning, South Africans woke up to the news that Black Motion – made up of Thabo “Smol” Mabogwane and Bongani “Murdahbongz” Mohosana –  had reportedly split.

The rumour was fuelled by Prince Kaybee who tweeted: “Still in disbelief that Black Motion is no more, the most decorated and astounding duo of our time”.

Celebrity blogger Musa Khawula retweeted the post, adding: “Remember when I told ya’ll that Black Motion is no more”.

Musa’s tweet stemmed from allegations he made in April that the duo had disbanded. However, their record label Spirit Motion quickly rubbished the rumours.

In a statement, it said: “Spirit Motion would like to state on record that Black Motion members have not parted ways. Black Motion still exists and has plans for more years to come.”

Neither Black Motion nor their record label has confirmed nor denied the latest reports.

Following Prince Kaybee’s claims about Black Motion, Nota took to his Twitter to share his own thoughts.

In a series of tweets, he blamed Bongani Mohosana’s baby mama DJ Zinhle and dancer Zodwa Wabantu, who admitted to bedding Thabo Mabogwane, for the band’s split.

“We can’t allow toxic black women to take Black Motion from us… Don’t worry about it too much Kabelo. We just need a reunion show for Christmas & we’ll have it come hell or high water. As black men, we need to prove that no woman formed against us can come between us!”

“Black women have been possessed by the white man devil… He has brainwashed them, made them lose their morals & he is sexually exploiting them at scale so that white girls don’t grow up as sex slaves, unlike black girls who consider it an option that should be decriminalised. Hell!”

“I blame Zodwa Wabantu for breaking up Black Motion… Zodwa broke a spell that was put on the group when she slept with the MOTION of the group & then went on a podcast tour to brag about it. That’s when the woman DJ decided that she wanted all the BLACK to herself. Fear them!”