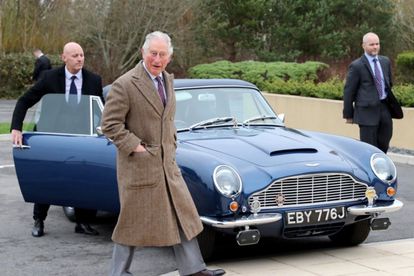 The Prince of Wales has spoken about his efforts to reduce his carbon footprint, including turning to a more sustainable source of fuel for his favourite Aston Martin.

PRINCE CHARLES CONVERTED ONE OF HIS OLDEST CARS

Charles explained he had converted the car – which he has owned for 51 years – to run on “surplus English white wine and whey from the cheese process” as it now uses E85 fuel, which consists of 85% bioethanol, which can be derived from a variety of sources including the food and drink, and 15% unleaded petrol.

The 72-year-old royal was asked if he was a “bit of a petrol-head” and how that aligned to his worries about the climate crisis.

He told BBC News: “Well, yes. But that was before we knew what the problems were.”

Charles also admitted he understood the feelings of activist groups such as the Extinction Rebellion but think their protest tactics, such as blocking roads, are “unhelpful.”

“All these young feeling nothing is ever happening, so of course they’re going to get frustrated. But it isn’t helpful, I don’t think, to do it in a way that alienates people.”

“So I totally understand the frustration, the difficulty is how do you direct that frustration in a way that is more constructive rather than destructive. The point is that people should really notice how despairing so many young people are.”

The prince replied “of course” when asked if he sympathised with teenage climate campaigner Greta Thunberg.

“All these young people feel nothing is ever happening so of course, they’re going to get frustrated.  I totally understand because nobody would listen and they see their future being totally destroyed,” he added.

“They just talk. And the problem is to get action on the ground,” he said.