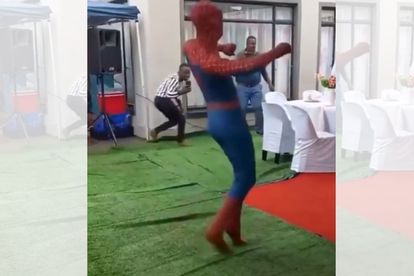 After three men in towels went viral for dancing to Amapiano in Washington DC, the South African singer, actress, model and television presenter, Nandi Madida took to Instagram to ask her followers if they know where to find the now-famous Amapiano dancing Peter Parker.

Watch out Tom Hiddleston, there’s a new Spider-Man in town

Yes, this comes after a man dressed in a Spider-Man suit dancing to MFR Souls’ hit song Amanikiniki trended on Twitter for all the right reasons. On social media, many went on to dub the dancer “Sipho-Man” and praised his dance moves.

Now, Madida is looking to find the dancing Peter Parker for her son’s birthday.

“Life of being a mother. My son loves this Peter Parker, does anyone know how one can book him for a birthday. I’m dead serious. Thank you in advance.”

In the comment section, many agreed that they also need this Spider-Man to perform at their functions.

“I need this Spider-Man in my life,” one social media user responded to Madiba. “If I do it, will it matter that I have dreadlocks, boobs and a booty?” said South African actress, Bontle Modiselle.

“We all love him this is hilarious I wouldn’t blame you if you booked him,” said another.

According to The Citizen, the Amapiano dancing Spider-Man is actually part of the entertainment crew from Ms Herbacks & the Mascots. The Mascots put on their suits and entertain guests South African style.

What’s more, “Sipho-Man” has been spotted in several other videos.

“Even in videos with the other mascots dancing, he always takes the spotlight,” the publication writes. “In one, he was dancing to Morhahu by Makhadzi. This video featured Minnie and Mickey Mouse, a Minion and Peter Parker. As always, Spider-Man’s moves were undisputed, others commenting that “’Spider-Man switched careers and he is excelling with this one'”.