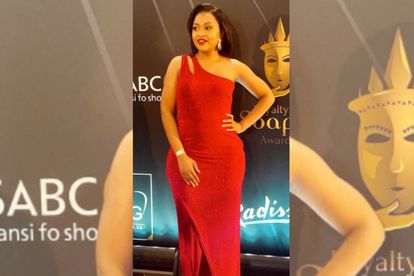 Lingashoni actress Liteboho Molise, who is popularly known for her role of Tebogo Mukwevho on SABC 2’s Venda soapie Muvhango has just called it quits with her polygamous husband, Thabo Twala.

Sunday World has reported that the actress and Twala have been living separately for three years and that she currently lives with their five-year-old child in the north-east of Johannesburg.

The actress’s relative has revealed to the publication that she has kept their separation a secret because she doesn’t want attention from the media again.

Molise’s marriage was in the headlines a few years ago (2016) when she discovered that her husband is still married to two other women (Mpho and Kate).

MARRIED IN COMMUNITY OF PROPERTY

Molise and Twala married in community of property in 2015 but their marriage ended in 2016 when she found out that her husband lied to her about being married to Katie and Mpho Twala behind her back.

The actress discovered Twala’s polygamous marriages after he paraded the expensive Merc he had bought for her on social media.

She found out through social media when tweeps asked her whether she was a homewrecker as Twala is still married to Kate and Mpho Twala.

“When I met him, Kate was history. She was no longer with him … even now they are no longer together.”

“In fact, Thabo had just broken up with some woman called Mpho when I met him.”

“He paid lobola for me and we live together with our child,” Molise said.

Molise was also baffled when her sister-wives took to social media and insisted they were still married to Twala and were happy with the “is’thembu” arrangement.

The relative told the publication that Molise was embarrassed because she did not know that she was in a polygamous marriage and broke up with him.