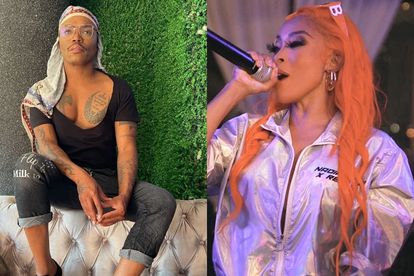 Khanyi Mbau made headlines earlier this month when she left her businessman boyfriend Kudzai Mushonga high and dry in Dubai. The actress “escaped” their baecation and hopped on a flight to Johannesburg without letting him know.

To add insult to injury, Khanyi Mbau sang a song with the words “leave the man in Dubai” at a groove which had tongues wagging as she trended on Twitter. The actress thereafter hinted that she intends on turning the song into an Amapiano hit.

When translated to English this means leave as if you’re coming back, leave the man in Dubai. This turned into the #DubaiChallenge and media personality Somizi Mhlongo is one of the first people to join.

Khanyi Mbau approved of Somizi’s #DubaiChallenge, taking to her Instagram story to express that it is the “best”.

“@Somizi #DubaiChallenge is the best!!! It’s the dragging off the feet for me,” wrote Khanyi Mbau on Instagram.

IS THIS A MESSAGE FOR MOHALE?

While this is not the first time Somizi joined in on the Khanyi Mbau “situation” humour, a close friend of his – television presenter Lerato Kganyago, noted that from the way he was dragging his feet in the video, he is not returning.

“😂🤣😂🤣😂🤣😂🤣 The ones that know you, the dragging of the feet, I know you ain’t coming back,” wrote @leratokganyago on Instagram.

This could have been a hint about his divorce from his estranged husband, Mohale Motaung. The pair confirmed their divorce following the aftermath of the abuse allegations made against Somizi by Mohale.

s“I took my keys and walked out, he took a knife. I was about to exit, so he said to me, ‘if you exit… I’m going to kill us both.’ So I took my keys and ran. He grabbed the knife and said ‘if you walk out, I’m going to stab you.’ Now I see a different person. I was sh*t scared and walked back into the house. He said ‘let’s talk.’ He cried and we moved on,” said Mohale in audio clips leaked by Sunday World.