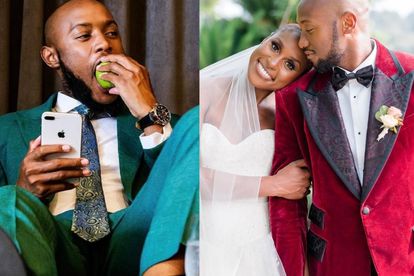 Actor Mohale Motaung responded to claims that he looks like Issa Rae’s husband, businessman Louis Diame via Twitter on 26 July.

Just after being dragged for “looting” Somizi, Rockville actor Mohale Motaung has found himself being the brunt of jokes again. Tweeps seemed to think he looks like Issa Rae’s husband.

Issa Rae shocked fans with a surprise wedding to her long-term fiancé Louis Diame. Announcing the news to her social media, the Insecure star and creator called her wedding an “impromptu photoshoot” which had Tweeps stitches.

After analysing the picture of Issa Rae’s husband, Tweeps thought he closely resembled Mohale Motaung, who is the husband of media personality Somizi Mhlongo.

A Tweep tagged Mohale in a picture of Issa Rae and Louis Diame saying “Sorry” with a thinking emoji and Mohale replied to the tweet jokingly saying he does not think they look alike.

“Pls, this gent does not look like me,” wrote Mohale.

While Mohale has been enjoying his new role of Zamani on Rockville, fans continue to question the status of his marriage to Somizi. Somizi spent the first quarter of this year taking “bestie-cations” with singer Vusi Nova while Mohale stayed lowkey and worked on himself.

For Mohale’s 26th birthday earlier this month, Somizi seemed to have ghosted him on social media, this follows Somizi unfollowing Mohale on both Instagram and Twitter in April. Mohale then popped up with his own “bestie” as he celebrated his birthday weekend with the rumoured ex of social media personality Lasizwe Dambuza, Wiseman Zitha.

There has been no official update on Somhale’s marriage since Mohale confirmed that they are not getting a divorce back in May.