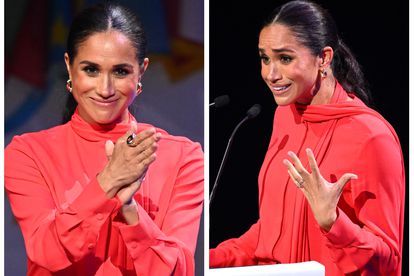 Meghan Markle’s speech at a charity event on Monday in Manchester has received backlash.
Photo by Oli SCARFF / AFP

Meghan Markle’s speech at a charity event on Monday in Manchester has received backlash.
Photo by Oli SCARFF / AFP

For the umpteenth time, Meghan Markle has been accused of stealing the spotlight, but this time critics have claimed the royal has taken things too far.

This week, Meghan and her husband Prince Harry travelled to Manchester, UK to attend a charity event. And the mom-of-two had lots to say…about herself!

After recent weeks of making headlines with comments made in her Archetypes Spotify podcast and her interview with The Cut, Meghan Markle has done it again with another speech which has been torn apart.

The trip marked her first return to the UK following her 2020 exit from the Royal Family – or “Megxit” as many publications have nicknamed it.

The former duchess was invited to give a keynote address on the topic of gender equality at the One Young World Summit 2022. The summit was aimed at youth leaders from around the world.

Wearing a red power suit, the brunette commanded attention with not only her wardrobe but her words too.

But according to The Sun, Meghan made 54 references to herself during her seven-minute speech. The only other woman she spoke about, was a woman she encountered from Eritrea.

She said in part: “There I was, the girl from Suits, and I was surrounded by world leaders, humanitarians, prime ministers and activists that I have such a deep and long-standing respect and admiration for— and I was invited to pull up a seat at the table.

“I was so overwhelmed by this experience, I think I even saved my little paper place card that said my name on it. Just proof that I was there, proof that I belonged.”

And royal critics claim her speech is reflective of her personality

Ingrid Seward, the editor of Majesty Magazine, told the publication: “It made no sense. It was all about her and related everything to herself. I don’t think she knew what she was talking about. It was just ‘me, me, me’ and praising herself”.

Royal author Phil Dampier added: “’The speech was really about her. She was using it as a platform to talk about herself and her past involvement with the organisation but it didn’t tell the audience anything practical in terms of advice to fulfil their potential”

Meghan’s @OneYoungWorld speech. References to herself are in yellow. pic.twitter.com/6rT8rriqhd

And just like her critics, many tweeps agreed with opinions about Meghan Markle’s speech.

@jimmyfailla: “Meghan Markle is giving a speech about gender inequality in the UK today. It takes a special kind of stupid to claim women are being held back on the SAME DAY they named a female Prime Minister”

@carol_biddle: “Wasn’t she supposed to talk about gender equality? Seems she is giving a job interview or a justification for why she is the most qualified person to be standing at that podium. Is she trying to convince the audience that she is not a fraud?”

@W_Coast_Bluesey: “I’ve said it several times, her speeches are perfect for drinking games. I, me, my…”

@CCstar38: “This speech has nothing to do about gender equality just all about Meghan”

@coffeebeanz2367: “I like how she prefaced another woman’s experience with ‘I remember’ as if it was her story. Me-ghan is every woman, there is no one like her”

On the flipside, there were a few who enjoyed Meghan’s ramblings.

Meghan Markle is a superb speech maker. Global leaders would do well to emulate some of her warmth, openness and empathy…