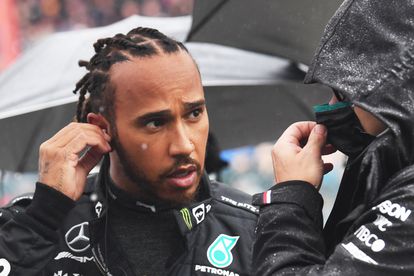 During Sunday’s Formula 1 race in Belgium, Lewis Hamilton got candid about his trip to the toilet.

Lewis Hamilton on his toilet visit

The seven-time world champion shared the details while hopping into his Mercedes, saying that the experience will ‘haunt him for life’.

“Hamilton was hopping into his Mercedes just minutes before the scheduled start of the race… when he shared his disgust at somebody dropping a bomb inside his trackside toilet,” reports Fox Sports. “The 36-year-old’s scathing attack on Formula 1 officials may be creating more headlines around the world, but it was his pre-race story that really needs to be told.”

“I’m glad I went to the toilet. The one I went to, someone had dropped a crazy bomb in there,” he said on his radio.

Peter “Bono” Bonnington’s, who is the senior race engineer for Hamilton, only reply was “pro’s and con’s, Lewis”

Hamilton went on to describe Sunday’s rain-lashed Belgian Grand Prix as “a farce” and said “money talks” after title rival Max Verstappen was declared the winner at the end of just two laps. In the shortest race in history — just 14km — and all behind the safety car, the grand prix started three and a half hours late.

But after two laps, and with the spray flying, the race was abandoned with conditions deemed too dangerous at the Ardennes track where Formula 2 driver Anthoine Hubert lost his life in 2019.

“Money talks. It was only two laps for the race to start – it’s all a money scenario,” said Hamilton who was third behind Verstappen and George Russell in the Williams.

“So since everyone gets their money back, I think the fans should get theirs too because unfortunately, they couldn’t see what they came for and paid for. I love racing in the rain, but today was different. You really couldn’t see the car in front of you. There was aquaplaning. It was unfortunately just a disaster on the track. You couldn’t really see five metres in front of you, the car in front was disappearing.”