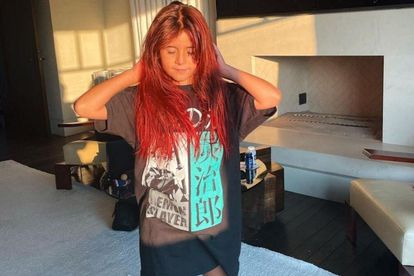 Kourtney Kardashian has faced the wrath of the parent police yet again after debuting a new look on her nine-year-old daughter.

Despite many of her followers loving Penelope’s new look, Kourtney Kardashian faced a ton of criticism from the parent police too.

“Why ruin your kids’ hair?” asked one follower.

A second added: “I don’t think coloring hair at such a young age is good. It’s kind of weird”

“My God these small kids are getting their hair colored…what’s wrong with today’s parents?” asked a third.

Earlier this month Kourtney showed off her own new hairdo: a shoulder-length bob.

KYLIE JENNER UNDER FIRE OVER GIFT TO STORMI

Kylie Jenner and her baby daddy Travis Scott were ridiculed online after they gifted their three-year-old daughter a school bus to play in.

The 24-year-old star – who is rumoured to be pregnant with her second child – posted the pics on her Instagram Stories, sharing: “All Stormi has been talking about is riding a big yellow bus. Daddy surprised her.”

Fans of the couple were bewildered by the unusual gift and slammed the couple for being “out of touch with reality”.

“Rich people are literally so far from reality they bought a school bus for Stormi to sit on,” tweeted one social media user.

“Stormi got to play make-believe poor today”, tweeted another.