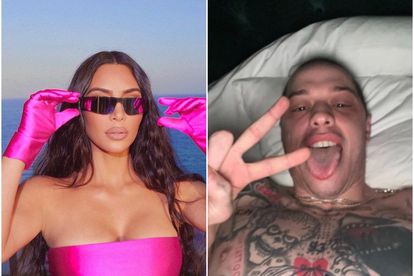 Whilst he may be known for his dark humor, Pete Davidson is serious about his relationship with girlfriend Kim Kardashian.

The 28-year-old comedian was on hand to show his support to his 42-year-old reality TV star partner at the Thursday night premiere of their Hulu reality show The Kardashians.

But whilst the couple did not walk the red carpet together, Pete held his partner’s hand as she braved the paparazzi .

PETE DAVIDSON MAKES AN APPEARANCE AFTER THOSE PICS WITH NORTH WEST

Dressed in a simple black suit, a plain white T-shirt and a pair of Vans sneakers, Pete Davidson made sure his girlfriend as the star of the show. Kim donned a silver latex gown created by designer Thierry Mugler which featured a corset bustier and a thigh high split.

The mom of four accessorised the look with metallic jewellery and an elegant up-do.

Pete Davidson’s appearance was the first since he was slammed by fans for his “inappropriate” behaviour to Kim’s eldest daughter North, whom she shares with ex Kanye West.

Earlier this week, TMZ published pics of North and Pete riding in a pink golf cart in Scott Disick’s gated community – with the eight-year-old child pictured on his lap.

Kim Kardashian told E! Entertainment that Pete Davidson was not yet used to the media attention their relationship attracted

When asked whether Pete will be her official date at the Met Gala next month, Kim had a coy response. She said: “I’m not sure. You’re gonna have to wait and find out. I think we’re still figuring it out.”

Kim did, however, reveal that their romance timeline will play out on the Hulu show. She told Variety that viewers will see “how we met and all the details that everyone wants to know.”

WHO IS SCOTT DISICK’S DATE?

Pete Davidson was not the only plus-one to make an appearance at the premiere of The Kardashians.

Scott Disick was spotted with yet another lady on his arm; Australian model Rebecca Donaldson. The 39-year-old has been linked to other models in recent months, including Bella Banos, Hana Cross, Holly Scarfone and Amelia Hamlin.

The couple teased fans that they had tied the knot in a surprise wedding in Las Vegas after the Grammys last Sunday. However, Kourtney now claims the nuptials were a “practice” as the couple has yet to acquire their marriage license.