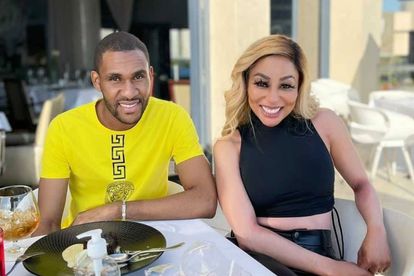 Khanyi Mbau and her Dubai bae Kudzai Mushonga have been through quite a lot this year. The couple first made headlines after the socialite dumped the Zimbabwean businessman in Dubai and flew back to South Africa without his knowledge. They then kissed and made up but left many speculating when Kudzai deleted his social media and Khanyi went quiet.

Now Khanyi has cleared the air for those who were wondering

Fans were left instantly confused when they noticed that Kudzai Mushonga had deleted his Instagram account. This is particularly puzzling for those who know that he mostly uses the account to show off his beautiful South African woman, Khanyi Mbau.

Many people instantly assumed that there is once again trouble in paradise for the couple who aren’t as lovey-dovey and in everyone’s faces as they usually are.

Khanyi did not let the breakup rumours last for too long and quickly took to her Instagram page where she shut them down. The media personality shared a photo of herself and Kudzai chilling poolside looking as happy and in love as ever.

She captioned her post with a simple red heart emoji.

The fans are elated

Many of the couple’s fans appeared quite relieved to see that things were still going well for the lavish couple who appear to be smitten. A lot of them headed to the comment section to express how happy they are for Khanyi and her man.

“The fact that people said what they said and he is still here shows a lot about the kind of woman you are, U inspire me#Phakama Mbauuu♥️♥️♥️💯💯”

“Only ppl who afford can do this up and down I voom you sisi you work hard.”