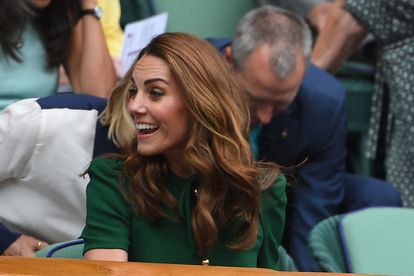 Kate Middleton, the Duchess of Cambridge is self-isolating, after coming into contact with someone who has tested positive for COVID-19.

According to a spokesperson for Kensington Palace, the mother-of-three is “not experiencing any symptoms”, but will self-isolate in line with the government’s coronavirus guidelines.

“Her Royal Highness is not experiencing any symptoms, but is following all relevant government guidelines and is self-isolating at home,” the royal representative said.

Kate was last seen in public attending the Wimbledon tennis tournament on Friday, 2 July where she met staff and sat with former player Tim Henman to watch Jamie Murray play in the doubles tournament.

The Duchess took to Twitter to share her excitement saying that is “amazing” to see the tournament in full swing again.

The patron of Wimbledon

The patron of Wimbledon hosts the All England Lawn Tennis and Croquet Club is now likely to miss the final of the men’s and women’s final at the weekend.

She had also been due to attend a service in celebration of the NHS’s 73rd anniversary at London’s St. Paul’s Cathedral on Monday.

The Duchess’s husband Prince William, the Duke of Cambridge, contracted COVID-19 last year, as did his father Prince Charles.

Celebrating during a pandemic

Earlier this year in celebration of Prince William and Kate Middleton’s 10th wedding anniversary on 29 April 2021, the couple went on to share a rare video showcasing their family of five.

After getting married in a lavish ceremony at Westminster Abbey in 2011, the pair celebrated their family in a video, featuring Prince George, Princess Charlotte, and Prince Louis.

According to Town and Country, the video sees the family at a beach near the family’s home in Norfolk during the autumn season. Filmmaker Will Warr reportedly put together the video in which the family laughs and traipses around the countryside, playing in nature and on the beach.

The Duke and Duchess posted the video alongside a heartfelt message. “Thank you to everyone for the kind messages on our wedding anniversary. We are enormously grateful for the 10 years of support we have received in our lives as a family. W & C,” they wrote.