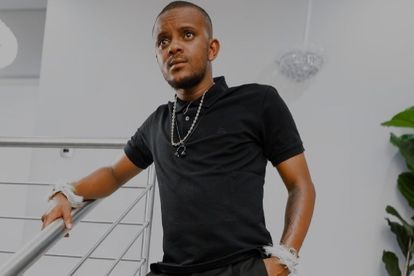 Fans of amapiano artist and producer Kabza De Small have seen a change in the star’s look. From his casual jeans, T-shirt and sneakers combo to Brentwood pants and Carvela loafers. This fashion style is synonymous with “amabhinca” or traditional maskandi music fans and musicians.

With this sudden change in his look and style, the Asibe Happy hitmaker’s fans are wondering if he is joining the likes of Mthandeni “Igcokama Elisha” Manqele and Khuzani Mpungose in the genre.

According to DailySun, Kabza De Small is a staunch maskandi fan. This was revealed in a recent interview with the publication.

“I’m known for amapiano music, but deep down I am Ibhinca. Whenever I get a chance I listen to maskandi. I will not name the artists I listen to for the sake of the peace, but I have my favourites.”

With regards to his new look, he revealed that he actually owns plenty pairs of Brentwood pants and Carvela loafers because of his love for cultural music.

In an Instagram post, the award-winning musician shared an image of him and Kabza clad in the modern Maskandi apparel, urging fans to welcome a “new member to the family”.

According the the maskandi artist, Kabza is actually one of his fans and he has been showing him the ropes in the genre.

“Maskandi fans, please welcome our newest member, Kabza de Small. He says he loves what we do. Welcome him with open arms like you did Sjava, Big Zulu and others,” Igcokama Elisha wrote.

Kabza has also hinted at a new album which will consist of amapiano and maskandi tracks.

“I’m making a full album of about 12 songs. This is a mix album and so far there are three maskandi songs. I have not titled the album as yet the work is almost done,” he said.

However, he made it clear that he is not going to leave amapiano. If anything, he is dabbling in a new genre as he believes that the time has come for him to explore.

“This does not mean I’ll stop doing amapiano, but I’ll be exploring other genres. For now I feel comfortable in maskandi and I’m enjoying it,” he said.