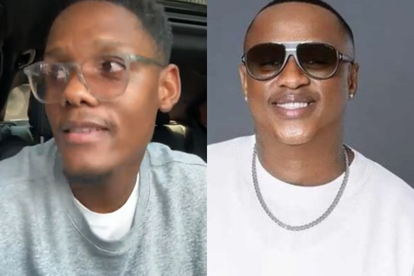 Samthing Soweto has clapped back at Jub Jub. Images via Twitter: @samthingsoweto/@azania1023

Samthing Soweto has clapped back at Jub Jub. Images via Twitter: @samthingsoweto/@azania1023

Jub Jub’s interview on MacG’s Podcast and Chill left more people bothered than entertained and that is becoming increasingly clear. It’s been over a week since the interview was publicly shared and South Africans have not stopped buzzing about it. In the viral interview, Jub Jub also took a jab at musician Samkelo Samthing Soweto.

And now the singer has decided to clapback at Jub Jub and social media users are loving it.

One of the many people Jub Jub offended during his MacG interview is local singer Samthing Soweto. In the now-viral discussion with MacG, Jub Jub explained how Samthing Soweto refused to work with him on his Ndikhokhele song.

In the clip, the Uyajola 9/9 presenter says he did not understand how big gospel stars like Rebecca Malope and Benjamin Dube were willing while Samthing Soweto refused.

He then went on to slam the musician’s skills while bragging about how long he’s been in the game:

Samthing Soweto has since decided to respond to Jub Jub by sharing a clip of himself singing the song that Jub Jub wanted him to work on.

South Africans absolutely cannot deal with the level of shade and have shared hilarious comments about it in the replies section.

Even Cassper Nyovest decided to compliment the young singer on his “beautiful voice”.

“Your voice is magical,” Cassper wrote.

“Lol…Jub Jub wa painelwa, his level of entitlement is on steroids.”