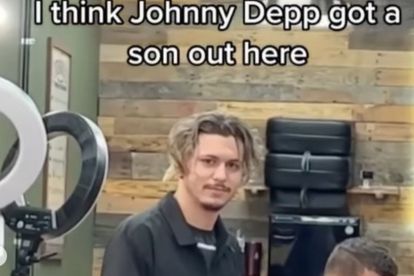 A US barber who resembles Johnny Depp has gone viral.
Image via Instagram
@pubity

A US barber who resembles Johnny Depp has gone viral.
Image via Instagram
@pubity

A man who bears a striking resemblance to Johnny Depp has gone viral on social media.

Emilio Gonzales, a barber from the US, has been compared to Hollywood actor, and netizens think he looks just like the A-lister!

The real Johnny Depp and his ex-wife Amber Heard are currently embroiled in a very public $100 million defamation lawsuit.

The former Pirates of the Caribbean star is suing his ex for claiming she was physically and emotionally abused by him throughout their relationship.

In return, the Aquaman actress is counter-suing her ex after his legal team branded her Washington Post op-ed – in which she described herself as a “public figure representing domestic abuse” – as an “elaborate hoax”.

Pubity posted a video of the man on their Instagram account, who boasts shaggy hair and a smirk that resembles Johnny Depp.

“Edward Scissorhands?” they captioned the clip of the barber.

And their followers agreed.

Meanwhile, a UK man who makes a living as a Captain Jack Sparrow impersonator from the movie franchise Pirates of the Caribbean has revealed how the Johnny Depp trial has affected his livelihood and reputation.

Simon Newton – who played the body double of the popular character in the movie – spoke to the UK morning show This Morning about his experience.

When asked how the defamation trial has affected him, he said: “A lot of my bookings are for private events – weddings, parties, that kind of thing – and I think people who love Jack Sparrow are still going to book Jack Sparrow.

“Where it affects me more is the big corporate events where people might be more concerned about their reputation.”

Newton revealed after Johnny Depp was first accused of abusing his ex-wife, he began to receive “inappropriate” comments.

He added: “I remember when the first Sun article came out, I was doing some walkabout acting at a town centre somewhere. It was all quite light-hearted, but you do get the occasional comment like ‘Beat your wife as well, do you?’.”