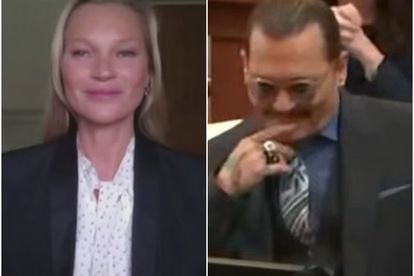 Twitter fans are campaigning for Johnny Depp to take ex-girlfriend Kate Moss on a date after she testified in court in support of him.
Image via Instagram
@lawandcrime

Twitter fans are campaigning for Johnny Depp to take ex-girlfriend Kate Moss on a date after she testified in court in support of him.
Image via Instagram
@lawandcrime

The appearance of Kate Moss in her support of her ex-boyfriend Johnny Depp during his defamation trial has sparked rumours that the flame still burns bright between the former lovers.

On Wednesday 25 May, the supermodel set the record straight on claims made by Amber Heard which suggested she had been assaulted by her actor ex. The British star – who dated the actor from 1994 to 1998 – was called in for questioning after Amber Heard name-dropped her during her own testimony earlier this month.

Amber and Johnny are embroiled in a messy $100 million defamation case. The former Pirates of the Caribbean actor is suing his ex-wife over claims she made in a Washington Post op-ed . In it, she claimed to be a victim of abuse during their two-year marriage. In return, Amber is counter-suing Johnny after his legal team labeled her claims an “elaborate hoax”.

During Kate Moss’s short testimony via video link, she debunked rumours suggesting Johnny Depp threw her down a flight of stairs.

This after Amber Heard suggested otherwise during her testimony earlier this month.

When asked if Johnny Depp pushed her down the stairs, Kate Moss said: “No”. She added: “He never pushed me, kicked me, or threw me down any stairs”.

According to body language experts, Kate Moss “lit up with warmth” when asked about her ex-boyfriend.

Judi James told MailOnline: “[When] asked, Do you know Jonny Depp?’ Kate’s very subtle facial movements suggest residual warmth at the memory. The right side of her mouth curls up in a subtle smile as she says, ‘Yes I do’”.

Similarly, Johnny Depp’s reaction was also noted – with tweeps claiming he “smiled” at his famous ex.

“The smile on his face when he saw her on the screen…..Gold! I literally got teary,” said a Twitter user.

@a_ruthie_: “Can we petition for Kate Moss and Johnny to get back together or nah?”

@hyperium: “Kate and Johnny made me realize that your first love ever will be loyal forever

@janssensnuf: “During the relationship of Johnny Depp and Kate Moss, Johnny came to Kate’s help many times. Now Kate Moss came to help Johnny Depp out in this case. That’s love”

@askjillian: “Kate Moss. I wish she and Johnny Depp were back together!”

@FactChecking4U: “I hope after this is over Johnny realizes KATE ..WAS THE ONE TO MARRY AS A LIFE PARTNER”

But whilst tweeps dream of a Johnny Depp and Kate Moss reunion, there may be one problem standing in the way: Kate’s boyfriend

She told  Harper’s Bazaar earlier this year of their romance: “Being in love makes me feel beautiful