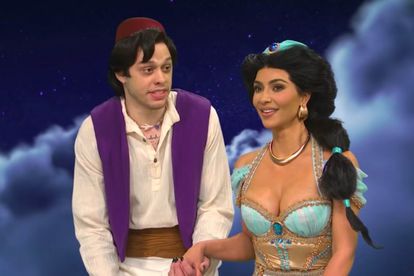 The 41-year-old beauty, who filed for divorce from husband Kanye West in February – and the Saturday Night Live comic were spotted on a rollercoaster at Knott’s Scary Farm in California for a night out with Kim’s sister Kourtney Kardashian and her fiance Travis Barker.

However, despite being pictured holding hands, insiders insisted Kim and Pete are just friends.

“They hang in the same circles so they will be together from time to time. It’s just friends hanging out.”

Earlier this month, Kardashian was guest host on Saturday Night Live and one sketch saw her share a kiss with Pete.

The SKIMS founder used her opening monologue on the show to joke about her divorce from Kanye, the father of her kids North, eight, Saint, five, Chicago, three, and Psalm, two.

“I’ve been very blessed in this life, and I’m grateful for everything, honestly, all the ups, all the downs. I mean, I married the best rapper of all time. Not only that, he’s the richest black man in America, a talented, legit genius, who gave me four incredible kids,” she said.

“So when I divorced him, you have to know it came down to just one thing: his personality. I know it sounds mean, but people keep telling me that comedy. And if there’s one thing I strive to be, it’s genuine.”

The ‘Keeping Up with the Kardashians’ star also poked fun at the political aspirations of both Kanye and her stepfather Caitlyn Jenner.

“Now I know we’re divided as a country, but I’d love America to come together, which is why I’m here to announce that I’m running for…”

“I’m just kidding, guys! I’m not running for president. We can’t have three failed politicians in one family,” she joked.