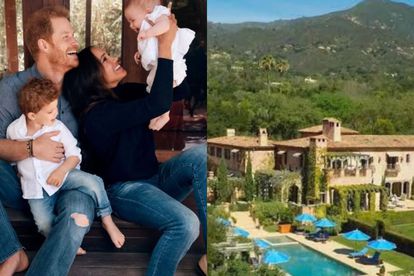 Meghan Markle shares a glimpse of the home she shares with Prince Harry. Images via Twitter @Dee09371086 @SussexPrincess.

Meghan Markle shares a glimpse of the home she shares with Prince Harry. Images via Twitter @Dee09371086 @SussexPrincess.

Duchess of Sussex Meghan Markle gave a glimpse into her and her husband Prince Harry’s Montecito mansion in her cover story with The Cut which was published on Monday 29 August.

The Duke and Duchess of Sussex Prince Harry and Meghan Markle live in a mansion in Montecito, California with their two children – three-year-old Archie and one-year-old Lillibet. The mansion is reportedly worth R246 million which equates to $14.65 million.

The former Suits star shared a glimpse of the mansion in a cover story for The Cut. The magazine revealed that Prince Harry and Meghan share an office with “two plush club chairs placed side by side behind a single desk, facing into the room like thrones”. The pair also have a grand piano from actor Tyler Perry in their sitting room.

“The Montecito house is the kind of big that startles you into remembering that unimaginable wealth is actually someone’s daily reality,” wrote Allison P. Davis.

MEGHAN: ‘WE DID EVERYTHING WE COULD TO GET THIS HOUSE’

Meghan revealed that she and Prince Harry did not want to visit their home at first because they did not have jobs at the time. However, when they eventually visited the home, they fell in love with it. The pair only toured the outside initially which included a chicken coop, a pool, pool house. So, the duke and duchess eventually purchased the home for $14.65 million which equates to R246 million.

“We did everything we could to get this house. Because you walk in and go… joy and exhale. And calm, it’s healing. You feel free,” said Meghan.

This comes after Meghan made headlines and set tongues wagging with the launch of her Spotify podcast. She claimed that she had to go out on royal engagements after her son Archie’s room had caught on fire. The first episode starred former tennis star Serena Williams.

The second episode releases today (30 August) with Mariah Carey being the second guest.