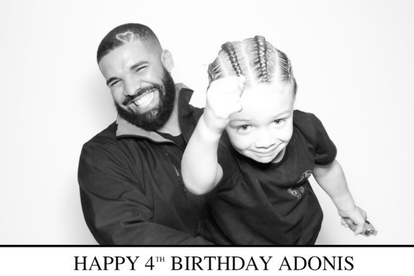 Canadian-born US rapper Drake’s son celebrated his fourth birthday on 11 October and of course, there was a lavish celebration. Drake headed to his Instagram page where he shared some snaps of the special occasion and needless to say, both he and his little boy were dressed as stylish as ever.

Drake’s baby is not a baby anymore

Four years ago, both Drake and his millions of fans were left shook after French artist and former adult film star Sophie Brussaux announced that she was pregnant with the musician’s child.

Fast-forward to a few days ago, the rapper celebrated his son Adonis’s fourth birthday — a race car-themed fun-filled event.

Taking to his Instagram page, Drake shared some snaps of himself and Adonis in a photo booth and also having some fun with a Bugs Bunny impersonator. The party also had a race car cake, a ton of balloons and of course, all little Adonis’s friends.

The father and son were also dressed pretty swaggy – while Drake wore camouflage pants and a black T-shirt, Adonis was dressed in a black T-shirt, black jeans, and some black sneakers. His hair was styled in his signature cornrows.

ALSO READ: Kamo Mphela weighs in on rumours Drake is crushing on her [watch]

Just a week earlier, Nicki Minaj’s son who she affectionately refers to as “Papa Bear”, celebrated his first birthday with a Kung Fu Panda-themed party.

In various snaps, little Papa can be seen surrounded by his doting parents and family who all enjoyed the fancy party decor that was set up as part of the celebrations.

In one adorable clip, Nicki can be seen trying to feed him a piece of cake but unfortunately, he was not about to have any of it.