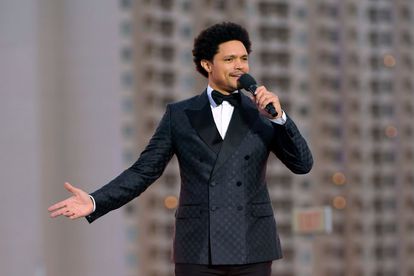 Trevor Noah addressed the elephant in the room when it came to hosting the Grammys on Sunday night in Las Vegas – and that is last week’s Oscars slap by actor Will Smith.

The South African comedian made light of the serious situation in which Will physically attacked Oscars host Chris Rock after he made an inappropriate joke about his wife Jada Pinkett Smith’s bald head. Jada suffers from auto-immune illness alopecia, which causes hair loss.

On the eve of the Grammys, Will Smith resigned from membership of the Academy of Motion Picture Arts and Sciences. He also revealed that he would “accept the consequences” of the board regarding an investigation on his conduct at the awards ceremony.

Whilst Trevor Noah caught flack for comforting friend Will Smith at the Vanity Fair after party last week, he did not shy away from the touchy topic as Grammys host.

Addressing the audience, he said: “Don’t even think of this as an award show.

“It’s a concert where we are giving out awards, we will be listening to music, dancing, sing, keeping people’s names out of our mouths and we are going to give people awards all throughout the night. So let’s get straight into it.”

And Trevor Noah wasn’t the only star to throw shade. In the Grammys pre-ceremony, actor LeVar Burton introduced one of the presenters with a sly dig at the scandal.

He said: “I want to warn you all that our next presenter is a comedian. If you know what I mean. So I need to caution everybody: Remain in your seats and keep your hands to yourself. Alright?”.

The next presenter – comedian Nate Bargazte – also referenced the slap when he walked out wearing a helmet on his head.

He told the audience: “They said comedians have to wear these now at award shows during their joke parts. It doesn’t even cover your face, I think it just focuses where you would hit me.”