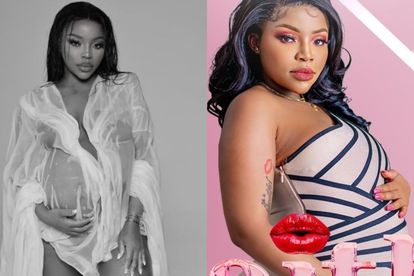 Reality TV star Faith Njilo, née Nketsi confirmed she’s pregnant with her husband Nzuzo Njilo’s baby by sharing a picture of her baby bump on her Instagram account today. This is after gossip blogger Musa Khawula shared a pregnancy picture of her, ahead of the fourth season of her reality TV show Have Faith, which premieres tonight, 15 August.

The Have Faith reality TV star Faith Nketsi took to her Instagram account a few minutes ago to share a picture of her bun in the oven, to confirm months of speculation that she and her husband Nzuzo Njilo are expecting.

“These past 9 months have been nothing but amazing. I can’t wait to share my journey with you guys❤️. To my husband ???? I love you so much and you are such a blessing to my life. My little family is complete and I am beyond grateful. To our beautiful baby ???? Love is what you represent and I will love you with everything I am and I pray every day that I am the best mommy to you.” ❤️❤️

This is after the entertainer rubbished claims that she is pregnant back in April by sharing a video of herself as evidence she is not pregnant on her Instagram story and asked people to stop the claims.

In the clip, the star said she is not pregnant and wants everyone to stop the rumours. She said she was not planning to have a baby soon, adding that she has gained a bit of weight.

ALSO READ:‘She does not want to be seen in public’: Is Faith Nketsi pregnant?

The media personality also took to her Instagram in July to confirm her reality TV show Have Faith is making a comeback in August. The fourth season will air on MTV from tonight 15 August at 9.30 pm.

Nketsi expressed her joy in the promo video as the show has made it to it’s fourth season and revealed that she’s taken another big step in life as she starts the process of getting married to her businessman boyfriend Nzuzo Njilo.

In the video, Nketsi’s mother says Faith is still young to get married and adds that she has psychological problems.

“I couldn’t be more proud. From season one Faith to season four Faith has come with so much growth and I can’t wait for you guys to witness that. None of this would’ve been possible without your support and views.”