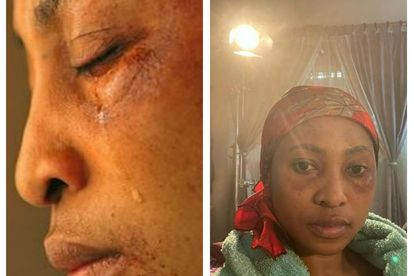 Mbali takes on a GBV role on Four Walls, a limited series. Images via Instagram: @enhlembali_

Mbali takes on a GBV role on Four Walls, a limited series. Images via Instagram: @enhlembali_

Actress Enhle Mbali Mlotshwa has stepped into a new role as Grace Molotsi in the new limited series, Four Walls – a role she says she had to draw inspiration from herself.

In Four Walls, Enhle brings to life the heart-wrenching tale of Grace, a well-educated woman who is stuck an abusive marriage. When Grace finally decides to end her husband’s life, her house is invaded by two thugs on the run from a cash-in-transit robbery gone wrong, who take her hostage – according to IOL Entertainment.

STEPPING INTO THE ROLE

The mother of two says that preparing for the role was not a difficult thing for her. This role was her way of telling the stories of the women that are abused by their partner.

“…This is me telling the stories of the women I’ve spoken to, through the Enhle Cares Foundation. I took from all of those women’s experiences and tried as best as I can to create a story that’s truthful, a story that represents women who are going through the most concerning [gender-based violence] GBV,” she said.

The fashion designer also told IOL Entertainment that Grace is a true depiction of what happens in South Africa every day.

In order to bring her character to life, she took parts of herself, her mother, grandmother, neighbours and even Uyinene “Nene” Mrwetyana, who was killed at the post office – as per the publication.

“And all the other girls and women who were brutally murdered…I took all of those stories and encompassed them into one so that people can watch and be uncomfortable, but in the discomfort, understand the pain of someone who’s experiencing any form of gender-based violence, whether it be financial, physical, emotional or mental,” Enhle says.

THE SERIOUSNESS OF ABUSE

Enhle adds that she wanted viewers to understand that abuse is serious, she wanted it to be put in their faces openly, so that it becomes a reality and not just a hashtag.

“As an actress, sometimes my voice is muted by social media and other noises so this was my way of protesting in my art,” she said.