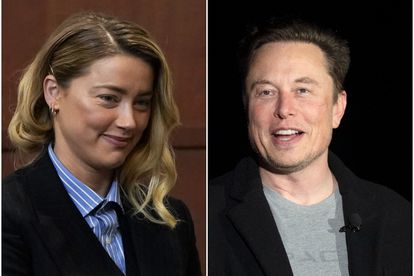 Amber Heard has testified about meeting Elon Musk at the Met Gala in 2016, whilst she was still married to Johnny Depp.
Image by: Elizabeth Frantzpoola, Jim Watson/AFP

Amber Heard has testified about meeting Elon Musk at the Met Gala in 2016, whilst she was still married to Johnny Depp.
Image by: Elizabeth Frantzpoola, Jim Watson/AFP

Amber Heard has shared her rom-com style meeting with Elon Musk, which happened to take place at the Met Gala after then-husband Johnny Depp “stood her up”.

On Monday 16 October, the Fairfax, Virginia court hear how the actress crossed paths with the billionaire businessman in 2016 during the red carpet event.

Amber Heard and Johnny Depp are embroiled in a messy defamation $100 million lawsuit against her ex-husband Johnny Depp in the Fairfax, Virginia Court. The former Pirates of the Caribbean actor is suing his ex-wife over claims she made in a Washington Post op-ed. In it, she claimed to be a victim of abuse during their two-year marriage. In return, Amber is counter-suing Johnny after his legal team labeled her claims an “elaborate hoax”.

Speaking during her cross-examination by Johnny Depp’s legal team, Amber Heard told the court how she attended the Met Gala alone in 2016.

Amber claims Johnny was meant to accompany her to the VIP event. The couple were the special guests of US fashion house Ralph Lauren. However Johnny was a “no-show”. This, claims the Aquaman actress, happened after a particularly volatile argument during the star’s 30th birthday just a month earlier.

She said: “So I ended up going by myself. I sat next to an empty place setting for Johnny that they cleared as soon as we realized he effectively stood me up on the red carpet.”

Amber Heard caught the eye of Elon Musk, who struck up a conversation with her. She continued: “I didn’t recognize [Elon] until we started talking and he reminded me we had met once before.

“He seemed like a real gentleman, he was really nice. He sat at a nearby table and we got to speaking that night and eventually became friends.”

Amber Heard initially met Elon Mask in 2012 on the set of the movie Machete Kills in which she starred and he made a cameo as himself.

She would officially separate from Johnny Depp in 2016, the same year that Elon Musk would divorce his then-wife Talulah Riley.

The exact date of when her relationship with the South African began has been disputed by Johnny Depp, who claims in legal documents that Amber began an affair with Elon “one month” into their marriage in 2015.

However, a spokesperson for Musk insisted that they only began dating in May 2016 – coincidentally during the time of their Met Gala meeting.

They said in a statement: “Elon and Amber didn’t start seeing each other until May 2016. And even then it was infrequent. Their relationship didn’t become romantic until some time later.”

Elon Musk denied these allegations as well. He said in another statement: “Cara and I are friends, but we’ve never done intimate things, she’ll confirm. “I want to confirm again that Amber and I only started dating about a month after filing for divorce. I was never close to her during her marriage”.

Amber and Elon announced their split in August 2017 in a statement to People magazine. Her divorce to Johnny Depp was finalised in early 2017.

Apart from Elon Musk, Amber Heard has been linked to a number of celebrities following her split from Johnny Depp.