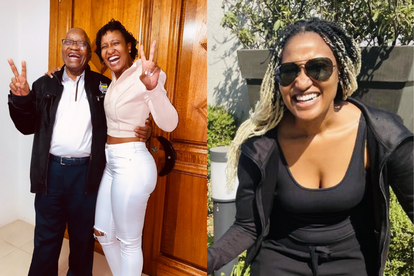 Dudu Zuma has once again been slammed online. Images via Twitter: @DZumaSambudla

Dudu Zuma has once again been slammed online. Images via Twitter: @DZumaSambudla

Duduzile “Dudu” Zuma, the daughter of former South African president Jacob Zuma never holds back on social media – even though she’s often criticised heavily for the things she says and posts on her pages. She has once again managed to ruffle a few feathers on Twitter after she retweeted a tweet about the country’s current president, Cyril Ramaphosa.

According to the tweet she reshared, he doesn’t have a long-term left and will soon be “disbanded”.

Duduzile “Dudu” Zuma has once again found herself in a bit of hot water on Twitter after retweeting a tweet about South African President Cyril Ramaphosa.

According to the post that was reshared by the controversial daughter of Jacob Zuma, Ramaphosa will soon be out of a job after he gets disbanded.

Very confidently, @comrademdu, the person behind the original tweet, shared when he thinks this will happen – in July.

“Ramaphosa will be disbanded in July. I can’t wait,” she tweeted.

While days earlier she shared a photo of the president which she captioned:

“ANC branches are currently discussing a possibility of turning the upcoming Policy conference into an elective Congress. Ramaphosa’s people know about this and they are trying very hard to collapse provinces and make sure they don’t elect leadership.”

Mzansi not so sure

The post didn’t sit very well with locals who quickly told the young woman where to get off. While some remarked that Ramaphosa was a lot better than Zuma, others agreed with her.

Here are some of their reactions:

“I know I didn’t pass my English with flying colors, but Can a person/ an individual be “Disbanded”? Jesu”

“When we disband President RAMAPHOSA your dead will be back here at correctional services ESCORT.”