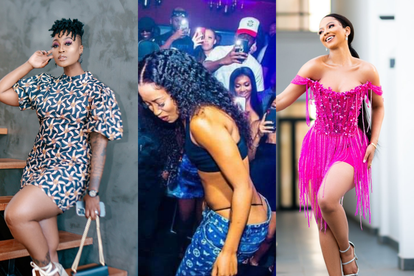 Lamiez Holworthy and Mihlali have also spoken up about Uncle Waffle’s thong. Images via Twitter: @lamiezholworthy/@Ditabe/@mihlali_n

Lamiez Holworthy and Mihlali have also spoken up about Uncle Waffle’s thong. Images via Twitter: @lamiezholworthy/@Ditabe/@mihlali_n

Uncle Waffles has been trending on South African Twitter streets ever since another video of her rocking a T-string went viral. In fact, G-string is still trending as locals discuss whether or not she’s trying to stay relevant by wearing sexy underwear. SA celebs such as Mihlali, DJ Lamiez Holworthy, and DJ Zinhle have all started defending Uncle Waffles.

Overnight sensation Uncle Waffles has been hogging headlines ever since she emerged online as South Africa’s next best DJ. It hasn’t been all sunshine and roses for the young lady who has been accused of having no real talent.

A lot of people have also seemingly been catching smoke about her decision to show off her sexy thong every single time she performs.

Over the last few days, she has been on top of Twitter trends as Mzansi discusses her lack of DJing skills and her love for showing off what her momma gave her.

“I love her so much but is this appropriate way to dress as a DJ?”, wrote Twitter user @Ditabe in one post while @NalaThokozane said: “Love her. I am not sure about her g-string game though.”

Ms Holworthy and Mihlali speak out

Since then Lamiez Holworthy, DJ Zinhle and Mihlali Ndamase have slammed the musician’s haters.

Both celebrities have been catching smoke from Twitter users who have slammed them for taking sides with Uncle Waffles.

On the other hand, many locals have shared that she has the right to wear whatever she wants and people should just stop talking about it already.