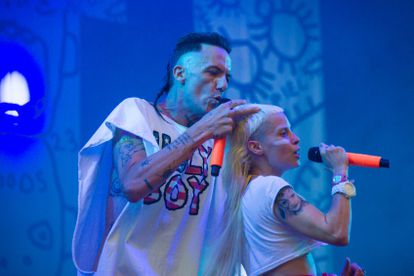 Child abuse allegations against Die Antwoord are being investigated by the department of social development.
Image by SEBASTIEN BOZON/AFP

Child abuse allegations against Die Antwoord are being investigated by the department of social development.
Image by SEBASTIEN BOZON/AFP

Die Antwoord has received a visit from the Department of Social Development at their Cape Town residence following claims the couple behind the controversial South African rap-rave duo neglected children in their care.

Ninja and Yo-Landi Visser – real names Watkin Tudor Jones and Andri du Toit – were accused by their former foster son of a number of alleged atrocities, including “grooming” him and his sister.

Gabriel du Preez, aka Tokkie, spoke to filmmaker Ben-Jay Crossman about his experience living with the couple, who have achieved international recognition.

In a YouTube video posted last month, Tokkie spoke at length about his childhood growing up with Die Antwoord. The hitmakers became Tokkie’s foster parents when he was 12 years old.

Tokkie revealed that his sister – who is a minor – was also later “adopted” by the couple. The 20-year-old also claimed that another underage boy from Fietas in Johannesburg was also taken in by the couple.

In addition, Ninja and Yo-Landi are parents to their biological daughter, who is now 17 years old.

Tokkie made several damning allegations against Die Antwoord, including

Tokkie, who is now 20 years old, revealed that he returned to his home in Fietas after he was shunned by Die Antwoord after becoming of legal age.

Tokkie also claimed he believed his underage sister, who at the time was still in the custody of Die Antwoord, was in danger.

In a new development, News24 reveals that as a result of the allegations made by Tokkie, social welfare paid Die Antwoord a visit at their Cape Town residence.

The publication also revealed that Tokkie’s sister and the underage boy are back in Johannesburg. Die Antwoord and their daughter are now living in Cape Town’s Dorp Hotel following the expose, claims the publication.

According to the Department of Social Development, a welfare check on Die Antwoord’s daughter was recently conducted.

Western Cape social development department spokesperson Esther Lewis told the publication: “The department can confirm that a home visit has taken place. Any further details in this regard can’t be divulged. At this stage, no further steps are being pursued against the owners of the premises [the Dorp Hotel].

Explaining the next steps, the spokesperson added: “In general, once the child protection investigation is concluded, the findings are presented to the Children’s Court, and the presiding officer will make a decision on which steps are to be followed next”.

According to News24, Die Antwoord have rubbished Tokkie’s claims via their agent.