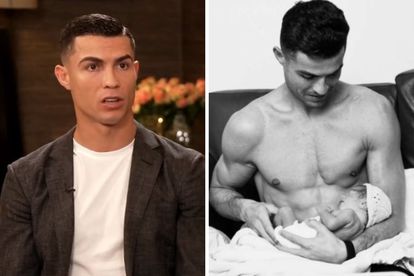 Fans have sympathised with Cristiano Ronaldo over his claims about Manchester United coach Erik ten Hag regarding his sick daughter Bella.
Images via Twitter
@piersmorgan/Instagram @cristiano

Fans have sympathised with Cristiano Ronaldo over his claims about Manchester United coach Erik ten Hag regarding his sick daughter Bella.
Images via Twitter
@piersmorgan/Instagram @cristiano

Cristiano Ronaldo’s sensational interview with Piers Morgan has seen him drop several bombshells about his team Manchester United and coach Erik ten Hag, whom he claims “had a lack of empathy” after his infant daughter became ill.

The world-famous football player shared his frustrations in an exclusive TalkTV interview which is set to air this week.

In a 90-minute sit-down interview, Cristiano Ronaldo revealed various reasons why he had “no respect” for coach Erik ten Hag.

One, in particular, was about how he felt “hurt” and “bad” after returning late to pre-season training earlier this year. This after his infant daughter Bella was hospitalised, after falling ill at just three months.

He said: “My 3-month-old daughter was hospitalised in July, that is why I could not return for pre-season and I felt hurt because senior executives at Manchester United doubted me”.

Ronaldo told Piers Mogan why he chose to stay behind with his fiancee Georgina Rodriguez and their family, who live in Portugal.

Also in the interview, Ronaldo accused Manchester United officials of trying to “force” him out.

He added: “’Some people, they don’t want me here – not only the coach but the other two or three guys. Not only this year but last year too.

“Honestly, I shouldn’t say that. But listen, I don’t care. People should listen to the truth. Yes, I feel betrayed”.

Ronaldo also lashed out at former Manchester United player Wayne Rooney, whom he claimed was unfairly critical of him.

Ronaldo’s revelation about his daughter’s illness comes a few short months after he revealed that her twin – his son – had died during childbirth in April.

Ronaldo and Georgina announced the heartbreaking news in a letter shared on Instagram. It read: “It is with our deepest sadness we have to announce that our baby boy has passed away. It is the greatest pain that any parents can feel.

“Only the birth of our baby girl gives us the strength to live this moment with some hope and happiness. We would like to thank the doctors and nurses for all their expert care and support.

“We are all devastated at this loss and we kindly ask for privacy at this very difficult time. Our baby boy, you are our angel. We will always love you”

WHAT SOCCER FANS HAVE TO SAY

Many were angry and disappointed at how management “turned a blind eye” to his personal tragedies.

@burnaculer: “Ronaldo’s son died and he played that same week for Man Utd. Almost lost his daughter that’s why he didn’t turn up for preseason and was insulted. Y’all can’t show him what to do now, family comes first”

@UgwunnaEjikem: “So the reason Cristiano Ronaldo skipped pre-season was to take care of his extremely ill daughter and the club was aware of this yet they let him get slandered by the fans & media because of it? I will never look at United the same way again, dead club.

@O_Nifesq: “The man lost his child, his other child was hospitalized and all we heard was ‘Ronaldo refused to resume pre-season. If at the level Ronaldo is, he still has to be doubted as to the health condition of his daughter, he was right to ask to leave”