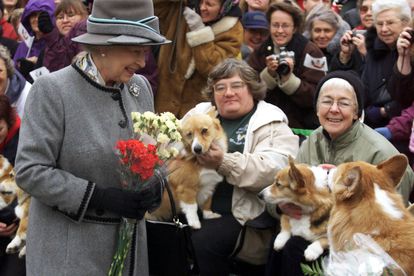 Queen Elizabeth has always loved corgis. Here she talks to members of the Manitoba Corgi Association during a visit to Canada. Image: Adrian Wyld/AFP

Queen Elizabeth has always loved corgis. Here she talks to members of the Manitoba Corgi Association during a visit to Canada. Image: Adrian Wyld/AFP

Queen Elizabeth II is said to be “delighted” with the two corgi puppies that have joined her famous household.

The Queen’s husband, Prince Philip, has been in hospital for two weeks and underwent heart surgery on Wednesday. On top of that, her grandson Prince Harry and his wife, Meghan, have a potentially explosive television interview coming up.

With Britain’s royal family going through such a torrid time, the arrival of two boisterous puppies will bring some comfort.

Queen Elizabeth, 94, has had more than 30 canine companions over the years. Britain’s longest-reigning monarch was recently given the corgi puppies as a gift.

It is believed the pooches are the first the Queen has owned that are not direct descendants of Susan, the dog she received for her 18th birthday in 1944.

The Queen is said to be “delighted” to have more dogs around her again. This was because she has been left with just one dorgi, Candy, since fellow dorgi Vulcan died in November 2020. A dorgi is a cross between a dachshund and a corgi.

‘It’s unthinkable that the Queen wouldn’t have any corgis’

A source told The Sun newspaper: “The Queen is delighted. It’s unthinkable that the Queen wouldn’t have any corgis.

“It’s like the Tower of London not having any ravens. They have only been there a couple of weeks but are said to be adorable and made the castle their home. Both are said to be bringing in a lot of noise and energy into the castle while Philip is in hospital.”

The Queen hasn’t had a pure-bred corgi since 2018, after 14th-generation descendant Willow was put to sleep in April of that year after contracting a cancer-like illness. another dog, Whisper, died six months later.

In 2015, the Queen stopped breeding dorgis, prompting speculation she would never get another pet. It was reported at the time that she was concerned about them being a trip hazard as she got older or that they would be left behind when she died.

However, it seems she has changed her mind.

Royal biographer Penny Junor said: “A few years ago it was decided she would have no more.

“But her corgis are hugely important to her. They have over the years been closer to her than any human being. The corgis are intensely loyal and loving, and they have never let her down.”

It is not known who the Queen received the corgi puppies from or what the dogs have been named.

ALSO READ: Details: Harry and Meghan’s ‘tell-all interview’ with Oprah WILL be broadcast in SA