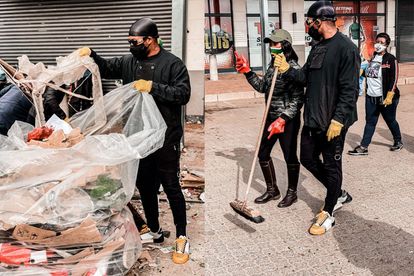 Room for error as a South African celebrity who is active on social media may be thin and some local favourites haven’t covered themselves in glory online this week.

From presenter Ayanda Thabethe’s tone-deaf tweets to actress Natasha Thahane offering victims a roof over their heads, it’s been a weird week of good gestures and hastily deleted posts.

Presenter and model Ayanda Thabethe has had a howler on Twitter this week. She kicked off things by saying she won’t be commenting because it could negatively impact her brand.

However, the model didn’t stay true to her word and said on Thursday in a now-deleted tweet:

Predictably, her tweet didn’t go down well with other users who criticized her for flexing her “black privilege” during a time where people are losing their businesses and jobs due to the looting.

JUB JUB: ‘LET THEM STEAL IF THEY HAVE TO STEAL’

Uyajola 9/9 host Jub Jub also came under fire for his comments which were viewed by many as inciting violence.

The host of the popular Moja Love reality show made a passionate speech in which he criticised “clever blacks” for judging and not understanding the situation of the people who are looting.

“Let them steal if they have to steal. Let them do whatever because the government has not provided that,” he says in the video.

It didn’t take the Moja Love channel long to release a statement in which it distanced itself from Jub Jub’s views.

Actress Natasha Thahane has lead by example this week by helping Twitter user @Thabane_ with accommodation after his apartment building burnt down as a result of the riots and looting in KwaZulu-Natal.

Can I please book an Airbnb for you & your family for the rest of the month. So sorry you’re going through this, she tweeted.

The Blood & Water star also reached out to a fan, Twitter user @Chris2nelly, to help him get his depression medication as pharmacies were also impacted by the looting.

RACHEL KOLISI: HELPING OUT WHERE SHE CAN

Springbok captain Siya Kolisi’s wife, Rachel, offered to share important information and suggestions of organisations that are helping to clean up the mess caused by the looting and riots in KwaZulu-Natal.

DJ Prince Kaybe joined the clean-up efforts in Daveyton Mall and Mayville Square in the Ekhuruleni area. He credited the Daveyton community for coming together and looking after their community.

Kaybee’s efforts to help out started earlier this week when he tweeted that he’s received a new contract and called on truck owners and drivers to help him meet the requirements of this contract.