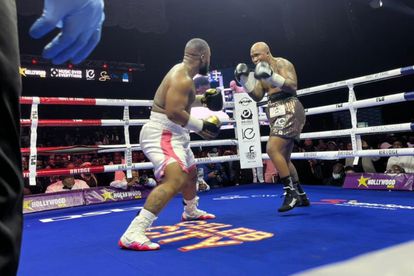 You win some, you lose some. But sadly for those who bet large sums of money on rapper Cassper Nyovest ahead of his Celeb City boxing match against Naakmusiq, it was a sore loss!

That’s because the star was defeated by his rap rival who emerged triumphant at the Sun City event on Saturday night. According to the scorecards of three judges from Boxing SA, Naakmusiq was ruled the winner of the boxing match.

And whilst it’s unknown how much Naak is set to benefit for his win, Cassper’s loss was a hard pill to swallow for others.

CELEBS WHO BET ON CASSPER VS NAAK

Saturday night’s match at the Super Bowl was packed with stars who had put their money on Cassper – like Big Zulu who bet R100 000 on his idol winning.

On Friday night, the Durban rapper revealed that he had placed the hefty bet on Cassper being crowned the winner.

And despite winning a Grammy a week ago, Black Coffee revelled in his loss after revealing that his “money was on Cassper”.

But one star who surprisingly escaped unscathed was singer King Monado who bet his entire house on Cassper losing the match to Naakmusiq.

He tweeted last week: “If  @casspernyovest  wins I am giving my house back to the community”, he said of his newly built mansion in Limpopo.

To make his victory sweeter, King Monada added another R25 000 to top his bet.

Meanwhile, tweeps who bet on Cassper also also licked their wounds on the social media platform.

WAS THE MATCH RIGGED?

Despite Cassper telling fans that the fight was not rigged, tweeps are still running wild with theories that it was.

According to conspiracy theories, Cassper and Hollywoodbets rigged the match for him to lose, in a bid to ultimately make him more money.