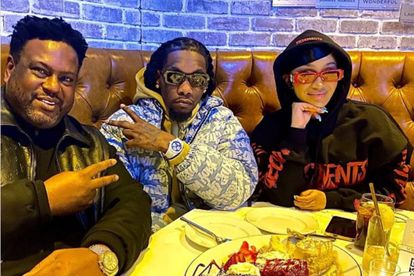 Cardi B and Offset with the owner of Brooklyn Chop House where they left a tip of more R21 000. Image via Instagram @sonpoohmusic.

Cardi B and Offset with the owner of Brooklyn Chop House where they left a tip of more R21 000. Image via Instagram @sonpoohmusic.

After grabbing dinner at local steakhouse Brooklyn Chop House, in Times Square New York, Cardi B and her rapper hubby, Offset reportedly forked out more than $1 369 (about R21 000) as a tip. The total bill tallied at more than R45 000.

CARDI B AND OFFSET’S DINNER SPLASH

MailOnline reports that Cardi-B, Offset and their entourage reportedly “took over a few tables” at the brand new Chinese-American fusion steakhouse, which is only set to open to the public in two weeks’ time.

The steakhouse menu features everything from dumplings and homemade noodles, steak and chops, fish and seafood, chicken dishes, satays and soup.

And then there is their LSD menu that can feed between five and six guests and includes salt and pepper lobster, Farmer’s Market Ginger Garlic Lobster, prime porterhouse steak and authentic pecking duck. The LSD will set you back about R7 500.

The owner of the steakhouse, Robert “Don Pooh” Cummins, posted a photo of him with the generous couple on Instagram and said: “Chopping it up with @iamcardib and @offsetyrn tonight at @brooklynchophouse thank you.”

Cummins is an entrepreneur with ties to the music industry. He has rubbed shoulders with musicians to the likes of Mary J Blige.

Cardi B and Offset back on track

The on/off power couple separated between December and 2018 and January 2019, amid cheating rumours. The couple has reconciled since then an appear happier than ever…