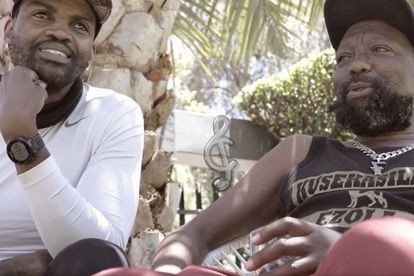 The plight of muso and TV personality Zola 7 has been a big talking point this week.

Many fans of the star – famous for his charitable reality TV show – were concerned about his health and welfare.

This, after it was revealed that the star suffers from epilepsy and has recently been ill. According to reports, Zola 7 has also fallen on hard financial times.

In a video posted on his Instagram, DJ Cleo revealed that he had visited his friend Zola 7 at his home.

The pair engaged in deep conversation and shared a meal – a Roman’s pizza.

“Long live this legend”, Cleo posted of a clip of them spending quality time together.

A post shared by Eskhaleni Yanos Vol1 OUT NOW (@djcleo1)

In another clip, Zola 7 jokingly asks Cleo about showing up “announced” on his doorstep.

“Do I have to announce my love for you? That’s a stupid question” Cleo cheekily responds to the star.

A post shared by Eskhaleni Yanos Vol1 OUT NOW (@djcleo1)

In the comments section of his posts, DJ Cleo was praised for his “kind” actions.

“Wow Cleo now I know why I really always have loved you! Thank you for showing up”

Meanwhile, a friend of Zola 7, has confirmed that banking details posted by a social media account reportedly belonging to the star, are real.

Fans have been begging the star to allow them to donate money to him. But up until recently, he refused.

Stanley wrote in his own Instagram post: “I place on record that in a meeting held this morning it was confirmed that the account is correct and he appreciates all the support shown so far”.

Stanley also posted a video of Zola 7 confirming that the information was factually correct.

On Wednesday, 9 March Zola 7 posted a message on Facebook which read: “I’ve received hundreds of texts asking for my banking details. I see I’m trending on Twitter and plenty of people are offering financial assistance as gratitude. I’ve never expected anything in return for the help I’ve given people in need but this is truly humbling.

Although Zola admitted he was a “proud Nguni man”, he did reveal he was now open to accepting cash from fans.

I've received hundreds of texts asking for my banking details. I see I'm trending on Twitter and plenty of people are…