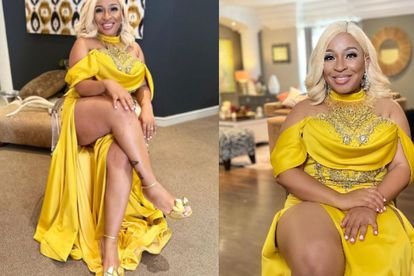 Loveline “Mrs Leo” Abinokhauno has caused quite the stir on the Real Housewives of Cape Town (RHOCT). So, here’s five things to know about the reality star.

Mrs Leo is a mom-fluencer and blogger by profession as well as an ambassador and an entrepreneur. She owns an events company called La Prive Concierge & Events and has 40 300 followers on Instagram.

ALSO READ: ‘You are disrespectful’: Inside Mrs Leo & Rooksy’s drama on ‘RHOCT’

2. MRS LEO HAS BEEN MARRIED FOR 14 YEARS

The RHOCT star has been married to Innocent “Mr Leo” for 14 years.

Mrs Leo is a mom of four – three daughters and a son.

4. MRS LEO IS FROM THE NORTH WEST

The mom-fluencer hails from North West but she moved to Cape Town and is not a permanent resident of the city.

5. MRS LEO IS ON ‘RHOCT’ TO DEBUNK MISCONCEPTIONS

Mrs Leo revealed that she wanted to clear misconceptions about her on the show because she has been in the public eye. She also said that viewers can expect to see her juggling her family, relationship and more.

“Viewers can expect to see the shocking reality of how cameras can change one’s character,” she said according to IOL.

“Most importantly, the viewers should expect to see my reality of juggling rumours, family life, relationship, my spirituality and addiction to finer things in life,” she continued.

“Having been in the public eye through social media, I wanted to clear any misconceptions and rumours formed by the public based on the little of me they see on social media,” she added.