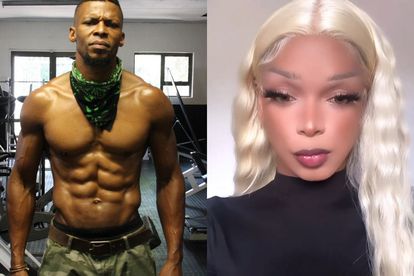 Demi The Doll alleged she had an affair with actor Vuyo Dabula on Friday 19 November but Tweeps thought the issue was more about her being transgender than him being married.

DEMI ALLEGES SHE HAD AN AFFAIR WITH VUYO DABULA

A proudly transgender woman who goes as Demi The Doll on Instagram, claimed she had an affair with Vuyo Dabula. She called him a “tranny chaser” and made other revelations about their alleged relationship over an Instagram Live session.

Tweeps seem to think that Demi made it more of a big deal that she was transgender than Vuyo being married. Take a look…

“Demi is making it seem like sleeping with a trans woman is shameful and Vuyo Dabula should be embarrassed. ????????????‍♀️ Personally for me, that doesn’t sound right ????. Clearly the issue here is not him being married,” wrote @Leighthembisile.

“Internalised hatred has gays and transwomen exposing the men they sleep with. Men who asked for discretion. Demi exposing Vuyo Dabula reads that Vuyo is doing shameful acts by sleeping with her. She is indirectly referring to herself as shameful and ‘other.’ .Feeding the homophobes,” wrote @ThisIsChester_.

DEMI CLAPS BACK AT TWEEPS: ‘IT WASN’T TO BASH HIS PREFERENCE’

Demi clapped back at Tweeps over her Instagram story. She expressed the issue was that the Generations: The Legacy star did not tell her he was married.

“But if we being real, if day one he told me he has a wife I wouldn’t of slept with him. Like sleeping with married men will mess up your luck real fast and I did suspect it but my dumb a** believed him anyway,” wrote Demi in an Instagram story.

“Y’all are completely focused on me when in reality it’s like y’all making it okay that he’s married and sleeps around and lies about it,”

Demi went on to say she was not bashing Vuyo’s preferences but speaking out against the infidelity.

“It wasn’t to bash his preference. I’m f****** beautiful I just happened to be trans it’s the fact that y’all think it’s normal to cheat on your partners multiple times then when they get sick then y’all wanna cry out, when its too late,” she added.