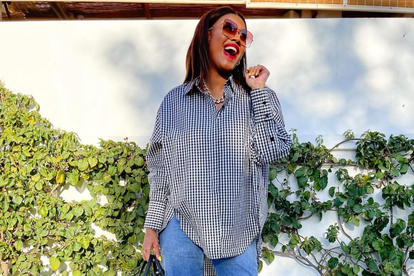 South African media personality Tshepi Vundla has issued an apology for her statements regarding women who tweet about their cravings using the slang word “sbwl” which comes from the Xhosa word “sayibaweli” which means “craving”. Her apology follows widespread criticisms from social media users who dragged her for degrading women.

We earlier reported how Tshepi Vundla caught a lot of unwanted attention after speaking as a guest on a podcast called On The Table which is hosted by Tshepi Mabs, DJ Black Velvet, a woman who names herself a church girl and the Ghost Lady.

During the show, Vundla made a number of controversial comments about women who use the term sbwl to supposedly get men to buy them things and give them money.

In the interview, Vundla can also be heard asking women who dress up and beautify themselves and expect men to pay for dates if they are prostitutes.

She has since issued an apology wherein she explains how she has grown as a woman and learned lessons. She also says that she did not intend on harming anyone with the things she said:

“Hi everyone. Firstly I would like to apologise for my past posts on social media. They were mean and demeaning and there is no excuse for them. Through time I have grown as a woman, partner and most importantly a mother.

“I have learned many lessons on this journey, including kindness and empathy, and that is how I live my life now and part of the lessons I impart to my son. There is no way for me to erase the past, all I can do is learn from my mistakes and carry the learnings with me moving forward.”

“With regards to the panel discussion, again I would like to apologise to those who were offended by my comments, that was not my intention. There was absolutely no malice intended and I blame this on my poor choice of words.

“With everything that is happening around us we are all consciously trying to be better people, I know I am, and we will all need to be held accountable for our actions. I will do better and will be better. Love & light.”

An apology not well-received

Despite appearing to be very sincere, tweeps continued dragging Vundla who will surely pay careful attention to what she says before she says it:

“Hi, Tshepi, can we use the word “sbwl” now? you didn’t touch on that part, I just need clarity for me and the women in this country.”

ALSO READ: ‘I suggest you don’t follow me’: Kelly Khumalo claps back at ‘disrespect’