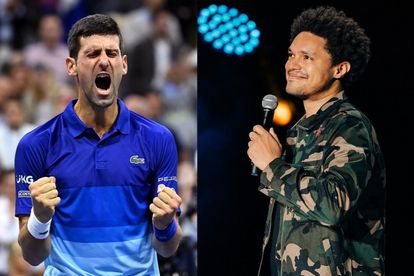 South African comedian Trevor Noah spoke about Serbian tennis player Novak Djokovic’s ejection from the Australian Open because he refused to get the COVID-19 vaccine, on an episode of The Daily Show on Tuesday 18 January.

Trevor Noah discussed Novak Djokovic’s ejection from the Australian on The Daily Show on Tuesday 18 January. Djokovic refused to take the COVID-19 vaccine and a survey found that 71% of Australians favored his deportation.

“This was supposed to have been a big week for Djokovic. But like my dream of starring in the biopic of Weird Al, it wasn’t meant to be,” said Trevor.

“Damn, it says a lot about you when that many Australians think you’re too dangerous to be in your country,” he continued, saying that the country’s health minister is a “giant poisonous spider.”

“And Australia is the last country that you want to get deported from. Imagine stepping off a 25-hour flight and then immediately having to get on another 25-hour flight! I don’t know what Djokovic thinks is in the vaccine, but it can’t possibly be worse than breathing in farts for 50 hours straight,” he added.

Trevor went on to say that it is not that surprising that Djokovic doesn’t want to get vaccinated. The comedian explains that Djokovic said he knows he is gluten intolerant because he is physically weaker when holding a slice of bread.

Trevor was joined by former tennis pro Michael Kosta who also weighed in. Kosta sang Djokovic’s praises asking what he has gotta do to compete and Trevor responded get vaccinated.

“And same as Novak, they said it was an issue with my Visa. What’s a guy gotta do to be allowed to play the tournament? Nine-time champion, three-time defending champion, world number one, tied all-time for Grand Slams, what do you gotta do, Trevor?” said Kosta.