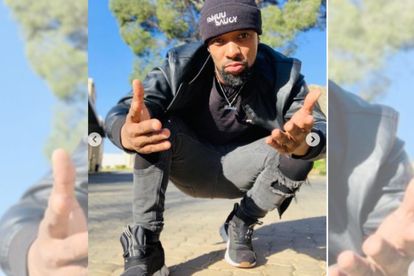 Former The Queen actor SK Khoza – who is popularly known for his role as Shaka Khoza in the cancelled telenovela is making headlines all over again after a concerning video of him went viral.

In the video – Khoza is spotted having a shocking verbal altercation with an unknown man that’s left many of his fans worried he might lose his acting gig in Kings of Joburg season two.

ALSO READ:‘He never learns’: SK Khoza’s axing from The Queen is no surprise

The Queen’s SK Khoza’s behaviour in a recent video has left fans of the actor concerned he might need rehab after he’s heard screaming insults at an unidentified man in the video.

He’s also heard body-shaming the unknown man and asking if he knows who he is.

Fans of the star have also stated that the star might be on drugs or drunk in the video.

The star also made headlines in 2021 when MultiChoice terminated his contract with The Queen after he was reportedly abused by his ex-fiancée Ayanda Hlongwane, who brought the charges to light.

Hlongwane filed charges against him after he allegedly assaulted her at her house in Fourways.

The telenovela let him go for the second time – where he played the role of Shaka Khoza for nearly five seasons.

HIS ROLE IN ‘KINGS OF JOBURG’

Fans were also super-stoked when Ferguson Films’ creator announced that their shooting season two of their Netflix series Kings of Joburg.

Viewers of the series reckon that the star will lose his gig in the series after the viral video.

Media mogul Shona Ferguson surprised fans on social media when he shared a snippet from the series.

Producer-actress of The Queen Connie Ferguson recently took to her Instagram account to confirm that Ferguson Films is shooting season two of Netflix’s series Kings of Joburg.

She shared a behind-the-scenes Instagram story from TV producer Sabelo Mgidi who was also part of season one.

‘HE CALLED ME THE K-WORD’

SK Khoza said the video does not show the part where the unknown man was insulting him, according to daneloo.com.

“I was away with friends in Mpumalanga and the white man you see in the video was racist towards me, so I retaliated. He called me by the ‘K-word,” said Khoza

“It is funny how I always trend for the wrong reasons and never for the good that I do, and the great work that I produce.”

“I am tired of all these stories that are made up about me. I was not on drugs, and I have never been.

The star added that he did not open a case because he does not have the energy to be in court.

“I have been to court for four months because I was accused of hitting a woman when I did not.”

“I am currently fasting on Ramadan and I am guarding my energy.”