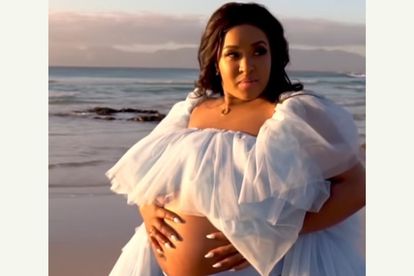 The pair have reportedly been together since 2017 and the footballer paid lobola for his wife in 2018. The couple had the first leg of their traditional wedding that same year and the second leg took place about three weeks ago.

“This was the second leg where her family was officially handing the brides to the Modise’s,” a source said to City Press.

On 9 October Koketso, who is known as “Kokieberry” on Instagram revealed that she was pregnant in a beautiful beach-themed announcement video. The couple held Koketso’s baby shower at Tugela Club in Sandton on Saturday 9 October.

The mom-to-be wore a stunning dress from  Swaziland-based clothing brand eMC studio. In the cinematic video, she is seen walking across the beach as she shows off her beautiful baby bump.

IS IT A BOY OR GIRL?

Teko and Koketso are expecting a baby boy as the video shows off the splash of the colour blue. Blue is most often used to symbolise a baby boy. Koketso’s gender reveal/ baby shower photos and videos were posted under #ShoweringKokieWithLove.

The video shows that the gender reveal took place at a mansion, with a stunning pool as the opening shot. She wore a white feather-dress from Tuelo Nguyuza Collectiv. The guests were dressed in green. Green and yellow are the usual gender neutral colours used before the baby’s gender has been revealed.

Koketso’s followers took to the comments section of the video to show her love.