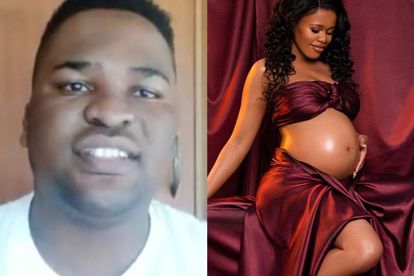 Blood & Water actress Thahane announced that she was pregnant in March. Many assumed that Orlando Pirates player Thembinkosi Lorch was the father of her baby as the pair were known to have been dating since their Zanzibar “baecation” in June 2021.

Slik Talk also jumped on the rumours of Lorch being the “baby daddy”, but he was not impressed. He  publicly told Natasha that this is one of the worst mistakes she could have made because the soccer player “will disappoint” her.

“This is one of the worst mistakes you’ve ever made in your life, you don’t beg on a guy like Lorch. He is a complete liability, a fraud and overhyped media darling. He will disappoint you every time,” he said.

He then went on to call Lorch a clown.

No confirmation of Lorch being ‘baby daddy’

Lorch has not yet confirmed nor denied that he is actually the father of Natasha’s baby. Natasha is believed to have given birth to her baby in late April.

The South African reached out to Lorch for comment but there was no response at the time of publishing.

WHY DOES SLIK TALK FEEL THIS WAY ABOUT LORCH?

Slik Talk told Natasha that Lorch will disappoint her every time. Why would he say that? It could be that he was referring to Lorch’s relationship history, which has been marred by controversy.

The Orlando Pirates player was arrested for allegedly assaulting his then-girlfriend Nokuphiwa Mathithibala in September 2020. He was later released on R2000 bail.

The Sowetan reports that Lorch allegedly slapped and strangled Mathithibala after she asked him where he had been, following his absence for six hours.

The matter was provisionally withdrawn in January 2021. Was this Slik Talk’s way of warning Natasha?