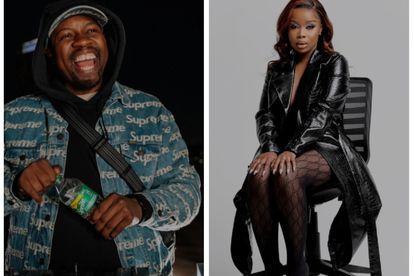 The pair were spotted hanging out together at the weekend, according to controversial entertainment commentator Musa Khawula.

Musa took to Twitter on Saturday 23 July to allege that the two media personalities are a “new” item.

He started by sharing a short clip of both Sithelo and Mr Jazziq chilling together at a club the Halala hitmaker was gigging at. In the video, the mom-of-three (who shares two children with Andile Mpisane) is seen holding onto her hubbly bubbly as Mr Jazziq talks to her.

“Lovebirds MrJazziQ and Sithelo spotted,” he captioned the second post.

‘I’LL GIVE YOU ANYTHING YOU WANT’: SITHELO

On Sunday, Musa posted another video. This time, Sithelo was in conversation with a man — allegedly Mr Jazziq — although he was not visible through the clip.

In the video, Sithelo, who is smoking hubbly bubbly, is heard telling the man that she will give him anything he says he wants because she is a woman of her word.

The man responds, “Am I not lucky?” To which she responds, “You’ve been lucky, babe.”

Back in April, Sithelo and Mr JazziQ sparked romance rumours after giving each other shoutouts on their social media pages. At the time, Zalebs reported that social media influencer had been doing it frequently.

When she announced on Instagram that she is now a dog mom, the dogs Instagram account quickly gained hundreds of followers but it was only following two people – Sithelo and Mr JazziQ further fueling romance rumours between the pair. In addition, the pair were seen sporting similar jackets on Instagram.