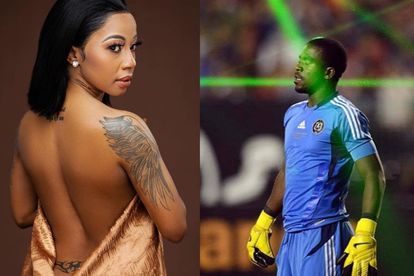 SFISO ON KELLY KHUMALO: ‘SHE KNOWS WHO DID IT’

City Press reported that Kelly Khumalo may be charged with defeating the ends of justice in the case of her “baby daddy” Senzo Meyiwa’s death. Kelly and Senzo have a seven-year-old daughter named Thingo together. The Empini hitmaker revealed that she was already three months pregnant with Thingo when she found out Senzo was married.

Sfiso Meyiwa thinks Kelly should be charged with defeating the ends of justice. He explains that he believes Kelly knows who killed his brother Senzo and she is staying mum.

“Kelly Khumalo should be charged with defeating the ends of justice and arrested,” said Sfiso to Daily Sun.

Senzo was allegedly killed in an armed robbery at Kelly Khumalo’s house on 26 October 2014. It was later believed that his death was a contracted hit and not a robbery.

It’s been seven years since Senzo’s death and Tweeps believe the hitman implicated in his murder had no “motive to kill.”

Kelly has been caught up in the rumours of his death with many believing she had something to do with it but Sfiso thinks she did not kill Senzo. However, he feels like she is withholding information.

“She did not kill my brother but she knows who did it and she is keeping quiet,” he continued.

SFISO: ‘WE ARE STILL WAITING FOR THE RIGHT ARREST’

“We know who pulled the trigger. Police know it too but for some reason they won’t arrest that person. We are still waiting for the right arrest,” he continued.

Sfiso also believes the person who shot Senzo did not do it intentionally.

“It was a mistake but the biggest mistake is that they are keeping the truth away from us,” he added.